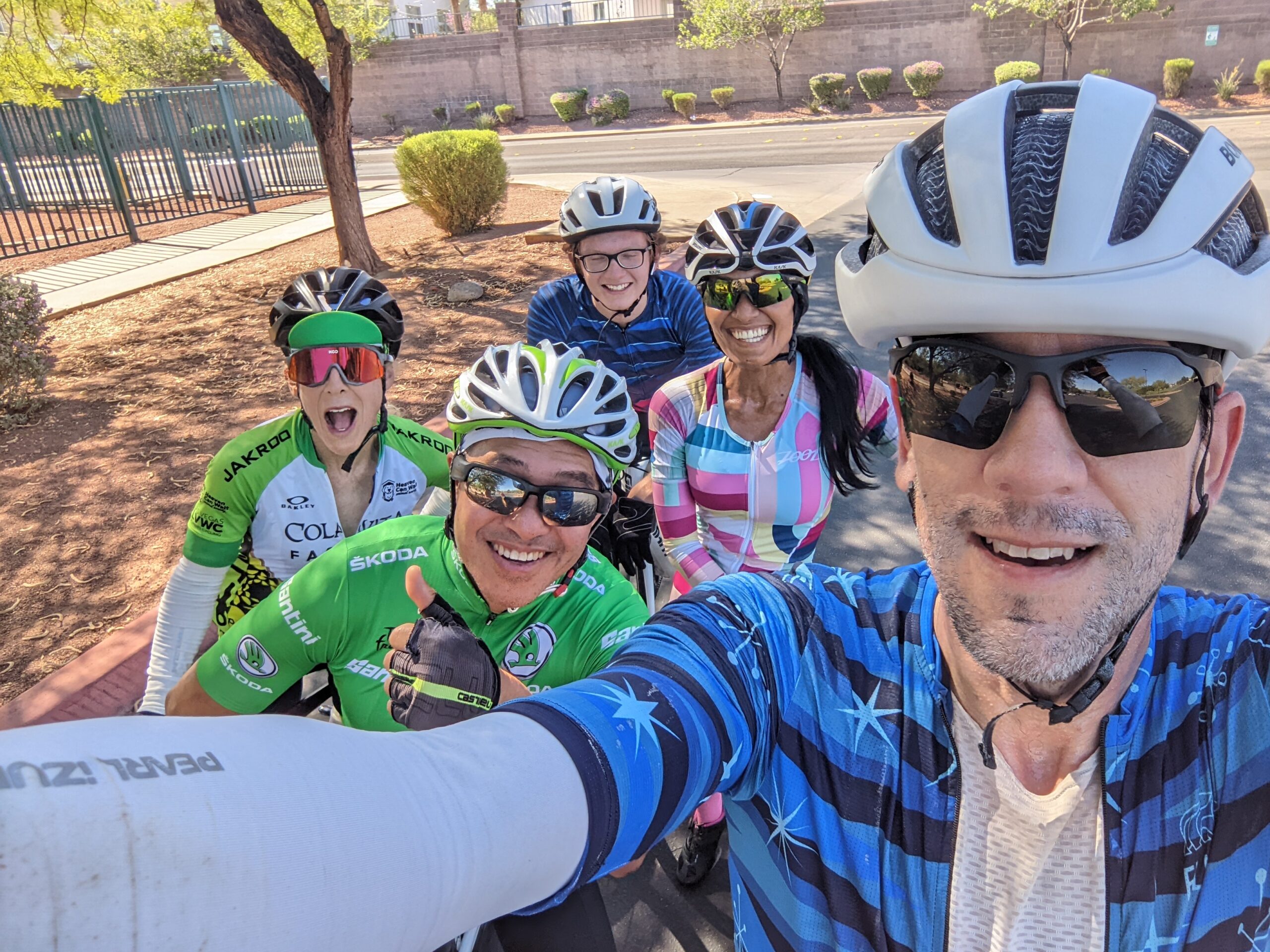 Oof another doozy of a ride this weekend.

Had a few different options for today. Adobo Velo was doing three different routes over in the Summerlin area and this ride with GVC. Sent out some feelers with some other riders and learned I’d have friendly faces on either ride Chose the GVC ride as it saved me from riding or driving over to Summerlin for the start. I registered for the ride and left a note that I’d be riding down while stopping at Anthem Hills Park. Was pleasantly surprised by a text message from Ken letting me know he’d be joining Joy and I early.

Ride out to the dam was really nice. Someone must have lit a match under someone because the climb up UPRR trail, especially after Arrowhead Trail, got pretty feisty. Was hanging in the rear with Ken yammering it up until he got bit by the speed bug and started putting some power down. Not wanting to go it solo I grabbed that wheel and did my best to hold on. Dude made a killer pull to bridge back up to the back of the pack. Color me impressed.

Unfortunately the need for speed had the lead group blow right past the bus stop that was to be the first regroup. We did eventually get everyone woahed up at the I-11 frontage. Had a change up and continued on to the RMT to head over to the VA home instead of taking the frontage down and around. We regrouped twice more before the AZ side of the dam. First was at the VA home and then again at the convenience store across from the Hoover Dam Lodge.

Did have an interesting interaction with a crazy in a blue BMW. First they pass our group along the roads leading in. Crossing over the double-yellow before a blind corner. Then after we cleared the security checkpoint, we come across them again crawling at 10 MPH while our group is all choked up behind them. A few riders went around. After clearing the last corner, and just beyond the parking structure, nut job decides to start accelerating while riders are trying to go around. To add a cherry on top as they come up to the first elevated pedestrian crossing they drop and anchor almost coming to a complete stop before turning right into the Old Exhibits area/restricted area. So many of us were so amped after that.

After a nice break at the AZ lookout we started back. Didn’t take long before I was bringing up the rear and nearly the last rider in to the same convenience store we stopped at on the way in.

With another nice break in the books we started out for Boulder City. This was the part I was absolutely dreading. The climb to BC always wrecks me. Did get the chance to have a nice, albeit winded, conversation with Adrian as we climbed. Made it to Industrial and held there while waiting for the rest of the riders to make the turn. Braydon showed up a short while later, having flatted, and we were back on the way.

With everyone having had a decent rest after the climb the group was back in quick mode. The pace picked up again heading back to UPRR along RMT. I was doing a decent job of hanging on but started to fade and was nearly last to roll into the bus stop at the top of UPRR. While we were all hanging out relaxing we all were pleasantly surprised with a Jeff Smith siting as he was heading the opposite direction as us.

As we rolled out of the bus stop, I was up front and was able to actually take a pull because we were going downhill. Kept pulling along the trail until we crossed College Dr. I went just beyond the crossing to hit the signal lights for the group and then had to double back a little. This put me at the back of the pack. At this point I was starting to feel my legs getting a little tired so I turned it down some and let the group go. Also allowed me to fall back to Braydon. One of my weaknesses when it comes to group rides, I hate leaving people behind, hate dropping people. Mainly because I hate being the guy that gets dropped. It’s pretty demoralizing and just kills any fun you may have been having.

We hopped off UPRR at Acacia Park in order to work out west over to Green Valley Pkwy. No one in our group (Ken, Joy, Sommai, Braydon, and I) wanted to ride along Horizon Ridge or try to cross over I-215 at Green Valley Pkwy. We lost Sommai at Gibson as she turned to head home leaving only four. By this time it was starting to get hot and we all agreed we could use a stop for some ice and water. We got the climb up Green Valley Pkwy out of the way and stopped at the Chevron on the corner of Horizon Ridge.

With the break out of the way out next stop would be Anthem Hills Park. Kept a nice and steady pace for the rest of the way. Was really starting to get tired and honestly just wanted off the bike. What really does me in is when my shoulders and neck start to ache and I have a hard time keeping my head up. Ya know nothing better than staring down at the road in front of you.

Had a decent stop at Anthem Hills Park for a quick chat before Braydon took off to head east on Reunion while the last three of us went west on Reunion to climb Cadence. Before leaving the park, Joy and I talked about what we were doing to get home and I told her, “I’m done, I’m cooked, I want off this bike. You ok with Anthem Pkwy because I’m wanting the most direct route home?” She liked the idea so we escorted Ken to his neighborhood before continued on Anthem Pkwy. I would peel off at Somersworth while she continued on to Bicentennial.

Once I got home, I just parked the bike in it’s rack, grabbed the essentials, and went inside to strip down and relax. Didn’t care that I left my lights on, I’d take care of them later. Enjoyed a nice ice cold Gatorade and Clif bar and fired up some YouTube to cool off and relax. Eventually took maybe a 15 minute power nap before the little darling came in and we started chatting for the rest of the afternoon.

Now here we are some 8 hours later and I’m fading fast. I didn’t sleep well last night, which isn’t uncommon for me the night before a ride, and I’m looking forward to my bed. Did get spoiled with my favorite post-ride dinner of TacoMan grill after my shower! Most likely will be driving the bike down the hill into Inspirada to do a 60-90 minute recovery ride to keep the legs loose before taking the wife out to breakfast.