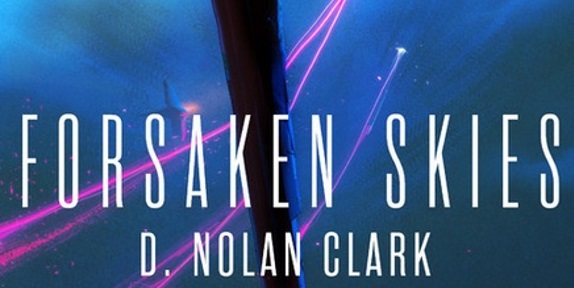 Forsaken Skies by D. Nolan Clark
My rating: 5 of 5 stars

Three days. Three days is all it took for me to complete D. Nolan Clark’s Forsaken Skies the first of his The Silence series.

I must confess I knew going in this book was written by horror author David Wellington. I’m a huge fan of his work owning and having read damn near everything he’s written. I love his writing style and was excited when I received an email newsletter announcing the release of his entry into space.

I was pleasantly surprised how quickly the book got right into the action. In prior books Wellington always seemed to spend a good first quarter to a third of the book in just setting up plot, characters, and back story. Forsaken Skies seemed like a huge departure from this particular aspect of Wellington’s writing style, but one that didn’t take away from the book. In fact I actually enjoyed the fact that the story got off to such a quick start. It made getting into it much easier.

The story begins with the main character, Lanoe, former commander of the Navy’s 94th squadron, ripping right through the center of a space station while attempting to save the son of a planetary governor. After returning to answer for his recklessness and apologize to the passengers of a ship he damaged, Lanoe volunteers himself, and some old squaddies, for a seemingly impossible mission to save a poor backwater religious retreat of a planet that has been written off by its sponsoring corporation. Lanoe must turn to a swindler thief of a lieutenant, Maggs, and former rebel pilot ace, Valk, when his former second in command, Zhang, recruits fewer of his former 94th squadron members than expected.

Lanoe and his team arrive on Niraya and immediately get into action putting together the feeble resources they have in order to mount a defense against a huge attack group. As the enemy fleet draws closer and Lanoe and his pilots engage in a few skirmishes they come to the startling conclusion that they are not fighting some corporations shadow armada but in fact an alien invasion force. The story continues to develop from here and builds to a great multifaceted final showdown between Lanoe and his band and insurmountable odds.

If you enjoy David Wellington’s other works you won’t be disappointed in Forsaken Skies. If you’re a fan of deep space sci-fi with pitched battles and near misses then this is also the book for you.