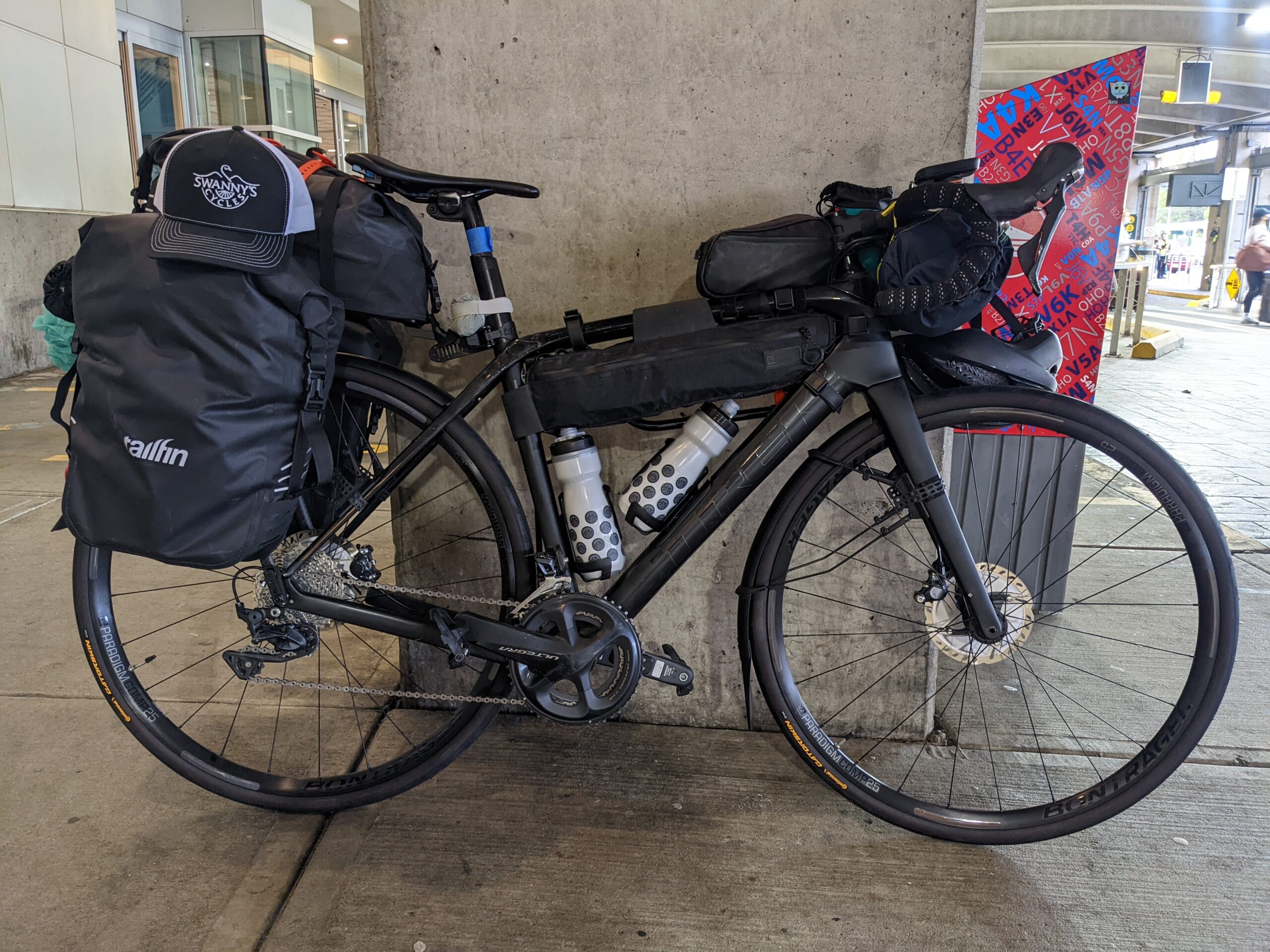 What a day.  I’ve been a bundle of nerves the past week and barely slept a wink last night.

I’ve been stressing getting Shadow here since I drummed up this crazy idea.  You always read the horror stories about flying with a bike.  Missing parts, destroyed box, blown spokes, and even cracked frames.  All that has been running through my head for weeks.

I got to the airport about 2.5 hours before my flight because I knew the bike would take extra time.  I was pleasantly surprised how well that went.  Everyone at check in was super friendly and accommodating.  I snapped a pic of Shadow before I went for security.

Security went well considering all the lithium ion batteries I had on me.  All my battery packs, lights, Garmin, EVERYTHING with a battery was in there.  Bet it made for quite the look in the scanner.

Sitting at the gate waiting for the plane I had the urge to go stare out the window to see if I could catch a glimpse of Shadow before he went on the plane.  As I told my wife, I fought the urge choosing to remain in ignorant bliss for the flight.

The flight went well and 3 hours later we were on the ground.  Customs was a breeze thankfully.  I went to the oversize baggage claim area to see if Shadow was there yet and no surprise he wasn’t.  I figured I’d take the idle time to go to the bathroom and change into my riding gear.  I came out of the bathroom and imagine my surprise to see a damn near PRISTINE box waiting for me.  Even writing about it now is bringing me to tears with happiness and relief.

Unfortunately there wasn’t much time for tears so I dove into getting everything unboxed and Shadow put back together.  Thankfully Zubi at Swanny’s is one hell of a teacher and I was able to get Shadow back up and running.

The ride from the airport to the hotel was perfect as a shake down ride.  Shadow rode great and I had a hard time noticing anything different.  It’s like I’d just been teleported from Vegas to Vancouver and started riding, like he’d never been boxed in the first place.

I had originally planned on taking a more direct route.  After doing some digging I found the Arbutus Greenway.  I haven’t had a chance to do any digging on it, but I think it’s a rails to trails project like the UPRR back home!  It was BEAUTIFUL!!

Had to jump off for some construction which also happened to be where I needed to continue north where the trail turned east.  Made my way into downtown Vancouver via Burrard Street which has the best damn version of “Bicycle Infrastructure” I’ve ever seen.  Dedicated roadway physically separated from road traffic. It was awesome!

Well got all checked into the hotel and getting ready to chow down.  Try to catch up more tomorrow when the “real” riding starts.