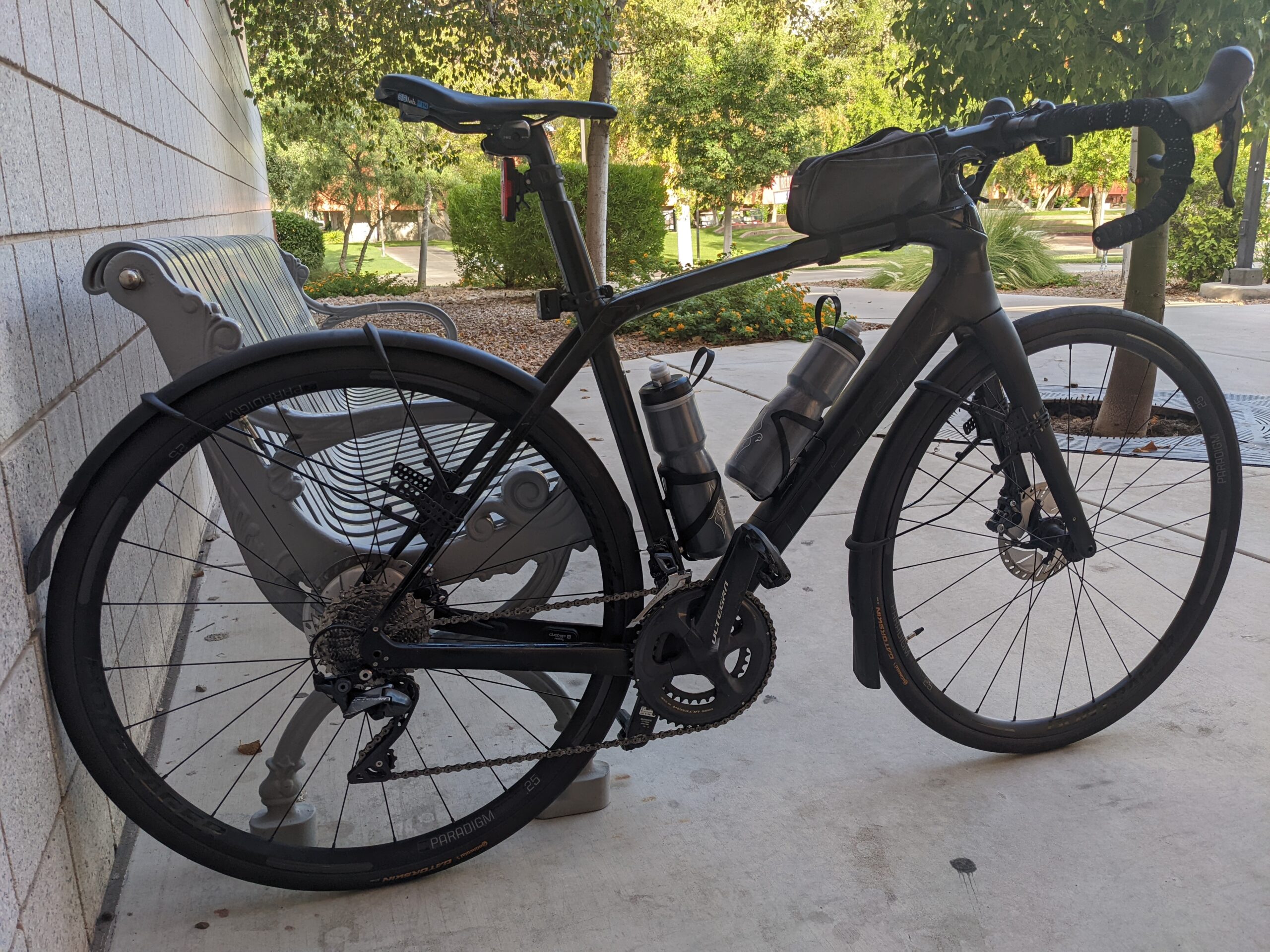 I’m one to always tout how awesome it is to commute to work. Refreshing wake-me-up rides in. Lovely end of day rides home. Blah blah blah. But things aren’t always rainbows, unicorns, glitter, descents, tail winds, and smooth asphalt. Is there anything worse than walking up to your car to drive home and find you have a flat? Imagine the same with your bike!

Every morning I do my standard pre-ride shake down. Lights, computer, and check the tires. On Tuesday I fumbled the valve some with the rear and it showed 20 lbs low. I topped it up to 65 ish and set off. Later that day on the ride home it felt a little soft, but I didn’t think anything of it.

Fast forward to this morning and it was down 40 lbs, a clear sign that there was a puncture. I topped it up again and set off to work. I figured I’d swap out the tube once I got to the office. You know what they say about the best laid plans.

I roll up to the office and do my standard post-ride cool down and cleanup to start the day. Before I could get to the tire, I received a message from one of my students that they were exposed to someone positive for COVID and waiting for results of a test. I told them not to worry and I’d cover the lab until they received their results. Unfortunately, the student didn’t have any at-home tests so the results took longer than expected. When they did get their results there was only an hour and a half left in their shift. They messaged asking if it was ok to just take the day. I agreed and supervised the lab until I was relieved around 1:30.

Heading back to my office I ran into my boss as he was getting his afternoon coffee from Starbucks. He invited me to pull up a chair with him and we proceeded to chat until closing the place down at 3:30. Of course that wasn’t enough so we ventured outside and talked for nearly an hour more.

As we parted ways, I noticed the time and it was just about time to start getting ready for the ride home. It was only when I walked into my office and saw my bike did I remember I had intended to fix my rear flat. I walked up, gave it a squeeze, and it was indeed flat as a pancake.

Thankfully I keep some supplies at the office for just such occasions. I had a patched tube in my on-bike toolkit that I swapped into the rear. Unboxed a brand new tube from my office desk and added it to my on-bike toolkit (I always prefer a new non-patched tube in my toolkit.). Finally, put the damaged tube in my backpack to come home for patching later. Got everything put back together and hit it with the floor pump I keep stashed under my desk. This exercise in bicycle maintenance/repair meant I left the office about 30 minutes later than usual. Like I said earlier, commuting ain’t always rainbows, unicorns, and glitter.

Other than the flat today’s ride was nice. Tested a couple route changes; some are keepers others not.

The morning ride in was absolutely beautiful. The temperatures started out dang near perfect. Chose to take a shortcut along Alyssa Jade over to Hampton which I won’t be doing again. It added two stop signs which only applied to my direction of travel. I’ll stick with the small climb to Atchley/Pine Prairie to avoid the stops and keep the right-of-way.

Ride home was nice as well. Definitely warmer than Tuesday, but not too terrible. At Sunset and McLeod I opted to make a left versus going into Sunset Park. From there I went east to make a right onto Tomiyasu. This eliminated the dirt/gravel section of Maule as well as the narrow gate at the Maule/Tomiyasu intersection. Right now the jury is still out if this change will persist or not. It was my first ride along Sunset and while it wasn’t awful it still made me a little nervous. I think if I were ride it more often I would become more confident on that section. Will probably try it a few more times before making a final decision.

Finally, if you’ve ever wondered what love looks like, check out the screenshot of the conversation between my daughter and I first thing this morning. This isn’t the first, and hopefully not the last, time that she’s offered to pick me up because she was worried about me riding in bad weather. No prompting. No hinting. Nothing. Ladies…take note. 😉

No ride tomorrow as I have the day off. Get to partake in everyone’s favorite chore, a trip to the DMV. Joy. At least I have breakfast at Scrambled to look forward to!