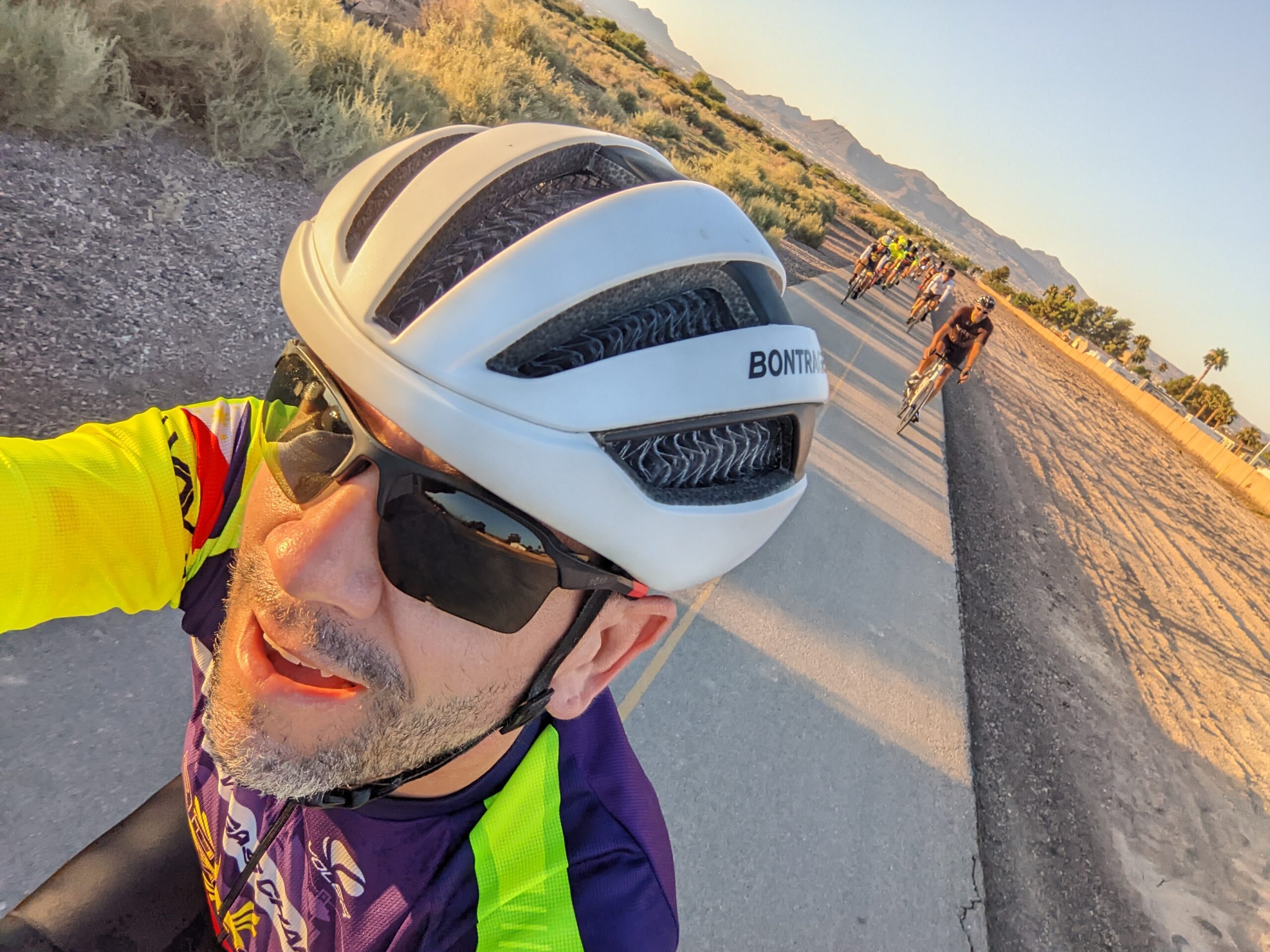 Donuts? I told you I don’t like ethnic food.

Another solid ride today. Was feeling pretty good until the last 7-8 miles. Time for a recap.

After last weekend’s ride I was chatting with Caleb about how he was missed and he was looking forward to riding with the group this weekend. I mentioned that Robert was out of town and we’d most likely need to plan something if we wanted to ride. We agreed we’d think about routes and host something. Didn’t take Caleb but five minutes to come up with this route. He described it as his favorite so that was that.

I went through an drew up the route on Garmin Connect and posted it to Facebook to make it an “official” Adobo Velo event. It didn’t take long before Caleb hit me back up that he was interested in riding over from Mountains Edge Park, but wasn’t sure how to get over to Pebble Marketplace. I went ahead and drew up the longer ride and share it with both Caleb and the entire group on Facebook. A day or so later got a text from Trimble about a shorter route. Fired up Garmin Connect and drew and shared that option as well. Being a computer geek has its advantages ya know.

Opted to ride down to the start this morning versus riding down. I know that I still don’t have the endurance for something that long and I’d planned on going to the UNLV football game at 12:30. Riding down would put me home too late.

Woke up this morning at 4:30 ready to go. Almost made a boo boo last night having first set my alarm for 5:30! That’s when I wanted to leave the house not get up. Yeah that would have been bad. Picked up a doughnut and coffee at Starbucks on the way down and arrived extra early. This gave me plenty of time to relax and get ready to roll out, but it didn’t take too long before riders started to roll up. Was pleasantly surprised at the turn out!

The start of the ride was pretty uneventful until we got to Wetlands Park. I screwed up and missed the turn into the parking lot off Hollywood Circle. Thankfully more than half the group knew the area better than me and made the transition from the road to the trail successfully. The rest of the group, myself included, had to resort to hopping the curb and being all clumsy. Herp derp!

Ride along Hollywood was really nice all up until the group got kinda screwed up. We were supposed to head east along Owens, but the group got confused and continued on to Lake Mead Blvd. Unfortunately, this is also where Caleb got a flat. We swapped out his tube only to find it wouldn’t hold either. Well BOTH of those tubes had temporary patches that had failed. Thankfully he had a brand new tube that we were able to get in and get him rolling again.

We met up with the main group at the Terrible’s on the corner of Los Feliz and Lake Mead to grab some snacks and water before the long trip out in the NRA. Had an absolute blast on the descent down to the guard shack. Was out in front leading out a great group trying to chase down another group who was out in front of us. Unfortunately, I didn’t have enough legs to reel them in.

We did regroup at the guard shack so we could be certain everyone got through the gates without issue. Thankfully we had enough passes for everyone.

We regrouped again at the intersection of Lakeshore Rd. Several folks had decided to break off at this point and head back to Pebble Marketplace. Took the opportunity to direct traffic, making sure everyone got going the direction they wanted, and said our goodbyes.

The main group continued along Lakeshore Rd. Was still feeling good at this point until we hit some of the climbs. The climb to Sunset overlook really took a ton out of me and I don’t think I really ever recovered. The heat didn’t help either. The climb up to Boulder CIty was especially rough. Fell back pretty far and was thrilled to roll into the Terrible’s at the half way point for a break.

Grabbed a couple bites to eat and a Gatorade to get me up the remainder of the climb to Industrial. Everyone was refreshed and we rolled out for a final regroup at Industrial before heading over to Railroad Pass. Again the group got split up with some continuing on RMT to UPRR while others, myself included, jumped across the I-11 to climb the frontage instead.

During the frontage, climb Adrian started cramping up and falling back. Jeff and I rolled into the bus stop and found everyone waiting. I insisted the group head on out without us while we waited for Adrian. Thankfully he wasn’t as far back as I’d thought and rolled in a few moments later.

The three of us lined up and put the hammer down, as best we could. We made some really good time and I felt like I’d gotten my legs back. That is until we made it to Wigwam and Gibson. Sitting on the corner I looked over to Adrian and said, “Put a fork in me, I’m done.” I was pretty cooked at this point, wanted to get off the bike, and was counting down the miles. Adrian was nice enough to be waiting for me at the corner of Pebble and Wigwam. I thanked him for waiting and shared, “If you ever wanted to know what ugly looks like when I mention it on a ride this is it.”

Was thrilled to finally roll into Pebble Marketplace. I pulled up a slice of curb to relax a little before getting everything packed away. Was so happy to be done and glad I’d chosen to drive to the start instead of riding. I was surprised when there were a few other folks calling for pickup because of the heat. Was also surprised when much of the group was still milling about at Starbucks and hadn’t left yet. Thankfully they all swung by before heading out. Some for Mountains Edge Park and others for home.

Unfortunately, the ride was long enough that I missed the first football game of the season, but it wasn’t even a conference game so no big loss. Had a great afternoon of hanging around the house. Have a short recovery ride planned for tomorrow before heading out with the wife. Not entirely sure how the commutes will go this week with the semester getting ready to start. The first week is always hectic.