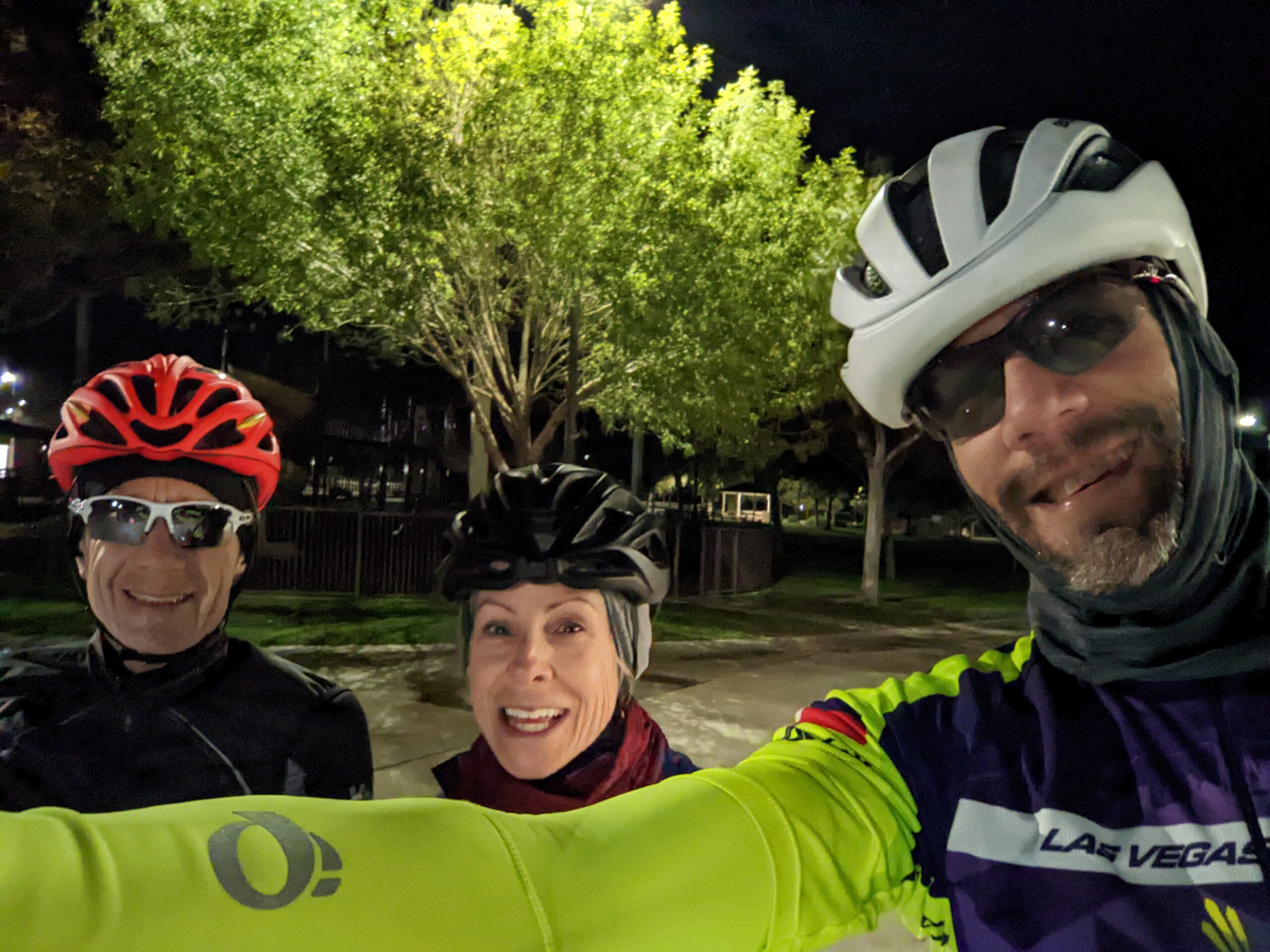 Not the best but still very good

When Robert Samano asks you to post a Saturday ride for Adobo Velo who am I to deny him?

I came up with this route a few weeks back and created a Facebook poll asking Adobo Velo members to vote on which route they wanted to ride. This route didn’t make the grade, but I pulled it out for today. It just so happens that last week we did “Mini Villa Ridge” and it only seemed appropriate to do the full Villa Ridge today.

The day started super early on account of not being able to sleep. I woke up around 3:30 and just couldn’t get my mind to shut back down and sleep. I tossed and turned, fired up the TV, and just vegged until around 4:15 when I started getting ready. Started by making a nice hearty breakfast for some sustained fuel for the ride. Big bowl of oatmeal with dried fruits, toast, and glass of milk. Would have had a nice cup of coffee too, but felt I didn’t have the time for it. Got all dressed up and rolled out at 5:30, as planned, in order to meet up with Mark and Joy at Anthem Hills Park. From there we would pick up Joe and John R on the way over to Mountain’s Edge Park.

Ride over went really well. Last weekend we made the mistake of taking Cactus because it was all torn up from Bermuda to Las Vegas Blvd . This morning I routed us across a combination of Levi and Erie which mostly parallels Cactus, and, most importantly, isn’t under construction. It worked out really well and we made good time. Poor John was so in the zone he blew right through Las Vegas Blvd thinking it was just another side street! Thankfully he heard us all hollering that we were going right. We made a stop at Cactus and LVB in order to pick up a 6th rider, only to learn that he’d either already rode through or would catch up to us at the park. Lastly, Joy had been itching for a nice sunrise picture and I happened to look over my shoulder as we crested the railroad bridge and the sunrise was awesome. I told her that it she wanted a nice sunrise pic now was the time to snag it. We all stopped for pics before descending down the other side.

Rolled up to the park and there were several riders there for another group ride with another club, NBC. Few of us said hello to a couple of the folks we recognized. Took a quick restroom break and rolled over to the lot to find that our small group was all gathered round and ready to roll out. David Burns snapped a pic of the group and we were off.

We made a stop at the corner of Blue Diamond and NV-159 for a quick regroup. Didn’t take long before the three riders back caught up and we were off again.

Next stop was a food stop at the Terrible’s on the corner of Desert Foothills and Charleston. I’d made sure to tell everyone that we wouldn’t be stopping at the overlook. All of us couldn’t be happier to hang out inside eating and drinking while warming up. We were all chilled to the bone and happy to wait for Joe and Tom who we thought were still back. After what felt like forever we started getting nervous as we hadn’t seen those two roll up yet. John gave Joe a call to discover that the two of them had gone over to the Dunkin Donuts! Buggers! We all rolled over there to gather them up to roll out, but they’d decided they were calling it a day and rolling back.

The rest of us rolled out to make our way north to Lone Mountain. Good old Stuart Ho decided to show off his gravel skills by sweeping past the group on the bit of gravel along the beltway trail. As our lead group rode up to the top of Lake Mead I stopped to wait to gather up Mark and Stu. The three of us rode together, pretty much, until Lone Mountain. Stu peeled off to search for a Pedal & Pour coin at Lone Mountain Park leaving the rest of us to continue on to Durango, we never made it.

As we were bombing down Lone Mountain, we rolled up to a red light at Fort Apache and Dave mistakenly made a right turn early. Thankfully it was easily correctable and we took a left onto Alexander to make the connection over to Durango. Honestly, I think we were setup by Dave from the start. He’d been talking about taking Alexander before we’d made it to Cliff Shadows. I’m onto you Dave!

Ride across Durango was uneventful. The climb up Villa Ridge was a typical nightmare. I felt great but was definitely a little tired and not as strong as I typically am. Then again I didn’t leave everything out there either. I hate blowing up on that climb and I intentionally rode to not blow up and thankful to report mission accomplished. After we’d all finished the climb we hung out for a bit to catch our breath. Crazy lady Joy was all talking up doing ‘Little Villa Ridge’ on the way back and thankfully we were able to talk her out of it.

Took a different route back through Summerlin instead of turning straight up Lake Mead to the Beltway Trail. I’ll say I think the roads were a little better outside the construction on Alta at the Beltway. It was at about this point we lost Dave leaving only five riders to finish out the ‘official’ ride.

Made one last quick stop at the Terrible’s at Desert Foothills and Charleston for a bathroom break before our Summerlin descent. Had a great time flying time all the way down. Love this section of road and have a blast every time I ride it. Even felt spicy enough to take a pull for the man, the myth, the legend, Jon Trimble. Of course it didn’t take long before he came back around and slammed me into a hurt locker.

From there on out we were just cruising. Joy, Jon, and John eventually dropped me along Fort Apache. I was getting tired and had put down a few significant efforts along the way. Rolled into Mountain’s Edge Park only a few minutes behind them. Mark rolled in a short bit later and we hung out and chatted a bit. Did catch the GVC gang flyby at one point. I’d considered hitting the road to chase them down, but I had empty bottles which needing filling and a full bladder needing emptied.

Our small group of four said our goodbyes to Jon and started out for our return trip. We decided to reverse the route we took over in order to avoid the construction on Cactus again. This was a great decision until about Erie and Bermuda. When we’d rolled through in the early morning there was no one out. By the time we were coming back through it was early afternoon and the town had come to life. At the two stops along the way it felt like we waited forever for traffic to clear enough for us to safely cross. Thinking Southern Highlands over to St. Rose in the future until Cactus is finished up.

At Sunridge Heights and Seven Hills we said our goodbyes to John. We’d thought of taking Sunridge Heights all the way over to Sandy Ridge, but Joy wasn’t fond of riding up through Anthem Hills Park with so many people out. The loop was a bear after so many miles and efforts, but we made it. Eventually we worked our way to the intersection of Fieldbrook and Sun City Anthem Dr where we said our goodbyes to Mark. After the fact I could really tell he was wanting to crack a century too, but going any further with the two of us kinda seemed silly at that point.

Now with only Joy and I was flew down Sun City Anthem Dr over to Scott’s Valley. From there we wound our way through the neighborhoods roughly paralleling Sun City Anthem Dr until popping out just before the shopping center at Bicentennial. Joy chimed in that I should follow her through Inspirada out to Democracy before turning home. Sounded like a solid plan to me and was a little more preferred to riding up Anthem Highlands.

As we rolled up to Democracy Joy crossed her century and I wasn’t far behind. She pulled a u-turn and I made my left to climb Democracy. I was under no delusion that I would be setting any PRs today and was just pushing each pedal down to get home. Did force myself to do full Democracy instead of cutting things short to come straight home.

Overall today was a great ride. Ended up with a century even though that wasn’t necessarily the goal. Once home I stuffed myself with a couple Clif bars and a bottle of Gatorade. Relaxed for a bit, started my riding laundry, before having a more substantial lunch. Which leads us to right this minute. Going to click Save on this guy and head out to TacoMan Grill for dinner!! WOO!!