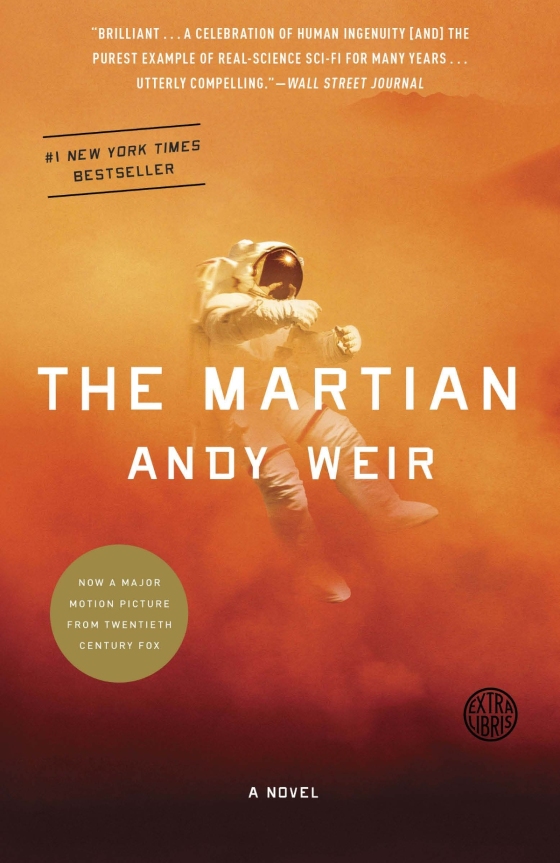 The Martian by Andy Weir
My rating: 5 of 5 stars

Holy cow I can’t believe I finished Andy Weir’s The Martian in two days! It was that easy of a read. There are parts that get very technical and scientific and for those who don’t enjoy technical and scientific things it may be off putting. If this happens to you just push through it, you won’t be disappointed. The attention to detail by Weir when describing the interplay of the difference sciences Watney has to deal with really bring the book to life.

Having seen and loved the movie I was worried that there would be a huge difference between the two and thankfully that wasn’t the case. When I hear a novel is being adapted into a movie that I may be interested in I try to go out and read the novel before seeing the adaptation. This time I didn’t have the luxury. I found out The Martian was a novel well after the movie studio has started the movie’s marketing push which wouldn’t give me enough time to read the novel before the movie.

Regardless I feel that the movie easily represents somewhere between 80-90% of the novel. Are there parts of the novel that were removed from the movie? Absolutely. I mean we’re talking about transforming over 350 pages of material into an almost two and a half hour movie! If they included MORE material from the novel the movie would have easily topped three hours. Did the movie studio add additional drama and tension that wasn’t present in the novel? Of course. OVERALL, I feel that the movie was a very fair adaptation of the source material.

So having read both the novel and seeing the movie would I recommend you read this book? That depends. If you like the humor Watney exhibits in the movie, want a little more depth (scientific, technical, and story), and generally liked the movie then I would certainly suggest that you pick it up and give it a read. You won’t be disappointed. However, if you’ve seen the movie I’ll say you’ve probably seem/read 80-90% of the novel and, like I said above, if you don’t want more depth then maybe save your time and move for another novel.

All that being said I found the book to be tremendously entertaining and easily one of my favorites.