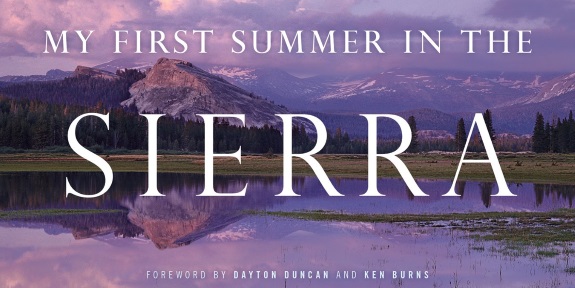 From My First Summer in the Sierra I

I decided to take a brief, at least one book, break from reading science fiction. I’ve been on a bit of a science fiction binge lately when it comes to my reading choices and wanted to give that part of my brain a rest. With that in mind, I decided to turn my attention back to John Muir and his book My First Summer in the Sierra.

So far I’m enjoying My First Summer in the Sierra more than The Mountains of California and came across the following passages I want to note before continuing on. They all come from Chapter 2, “In Camp on the North Fork of the Merced”.

Another glorious Sierra day in which one seems to be dissolved and absorbed and sent pulsing onward we know not where. Life seems neither long nor short, and we take no more heed to save time or make haste than do the trees and stars. This is true freedom, a good practical sort of immortality.

Hard to argue with Muir on his definition of “true freedom”. Here he is living life without a care for the passage of time. He has no need to hurry and no need to take it slow. He just goes without regard for time. No fear of leaving things unaccomplished, unfinished. No desire to hurry up to try to squeeze in as many things as possible into our short lives. Just existing in the now, enjoying it, savoring it.

Only spread a fern frond over a man’s head and worldly cares are cast out, and freedom and beauty and peace come in.

To give this quote some context, Muir has traveled up into the Sierra to help a Shepard who is watching his boss’s flock. He has been given the ability to go out and explore the area while maintaining a minimal presence with the Shepard. During the first month of the trek into the Sierra they come to the north fork of the Merced river and setup camp. While here he finds amazing stands of ferns that are as tall as a man and so thick as to form hallways through the underbrush. This is the scene he sets before the quote above. While I can’t speak specifically for fern fronds, I can speak to nature in general.

Recently a friend and I drove to Cedar Breaks National Monument to hike along the rim to Ramparts Overlook hoping to escape the previous week’s oppressive heat of above 110°F (43°C). Before starting out the Visitor Center had a sign stating that the previous day’s high temperature was 72°F (22°C) and today was to be much of the same. During the hike we watched as thunderstorms developed to both the east and west of us and even had a very brief sprinkle upon returning to the car. After finishing we sat down in the car, rolled down the windows, and just sat letting the wonderful breeze flow through. There I sat for near on an hour while my friend slept in the seat next to me. Having now read Muir’s words they ring true to that hour a few weekends ago. During that hour, nature was flowing around and through me giving me a true sense of freedom, beauty and peace that is difficult to find.

Having escaped restraint, they were, like some people we know of, afraid of their freedom, did not know what to do with it, and seemed glad to get back into the old familiar bondage.

This quote also needs some context as well. Here Muir is referring to some errant sheep that had drifted away from the main flock. He finally locates them all huddled together and not wanting to move.

Muir’s addition of the clause “like some people we know of” tickled the philosophical part of my brain. Is freedom here being used as an analogy for the escape for any number of “bondage” situations? Can an analogy be made to a criminal recently released from prison who can’t handle the free world and commits a new crime just to return to prison? Or a soldier who on the eve of their discharge chooses to re-enlist to remain in the safety of the structured military lifestyle? Maybe someone who has struggled with debt and finally made their final credit card payment only to go shopping for some new clothes?

Or perhaps there is something greater here. In the states we’re taught that a good fulfilling life generally goes like this: graduate high school, graduate college, get a job, get married, buy a house, have kids, buy a larger house, get a better job, start your kids on their life, retire. Only once you retire are you allowed to ‘live’ and explore all the things that are great with this world. What if the flock of sheep represents modern society and this idea of ‘life’ and this small group represents those who have escaped the “bondage” of society? Some escapees take this new found freedom, run with it, and live their lives on their terms. Some who come to mind are Foster Huntington, Kevin Russ, and Mitch Cox; instead of living society’s view of a ‘good fulfilling life’ they have broken free of the flock. While others experienced a taste of freedom, didn’t find it to their liking, and returned society’s view of a ‘good fulfilling life’.

Ultimately, neither choice is wrong or right, only that which fulfills the individual.