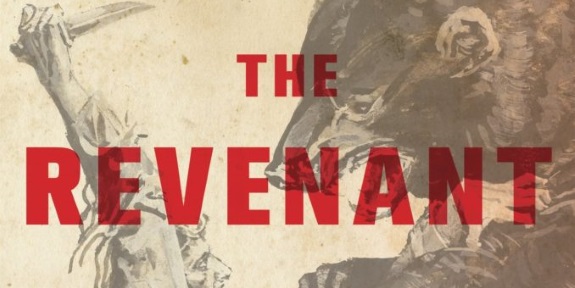 The Revenant by Michael Punke
My rating: 5 of 5 stars

The Revenant has been sitting on an Amazon wish list since September 2015 when I saw the previews for the Leonardo DiCaprio movie. The goal was to read the book before seeing the movie which I regularly try to do. I never got around to picking up a copy of the book, but ended up watching the movie a few months ago. And, as luck would have it, I was gifted a copy at Christmas and here we are with a review.

The Revenant is a great semi-biographical story of the main character Hugh Glass, how we was mauled by a grizzly bear, abandoned by not only his comrades but by two people who were tasked with staying with him until his death, survived the mauling, and went on an amazing journey of revenge. Of course if you’ve seen the previews for the movie you already know most of this.

When it comes to the book, I really liked how Michael Punke organized the material. Instead of organizing chapters chronologically, Punke bounces you back and forth from the present to the past and back again. Punke accomplishes this with logical flashback chapters that give you a look into the past of several of the key characters. This is a huge oversight of the movie. Punke weaves the storylines together with precision with characters literally passing each other in the night without the others knowledge.

Punke does a good job really fleshing out all the different characters in the story. Many characters are based on real people, with real stories, and Punke has done a good job of taking liberty with the backstories of some of the characters, such as John Fitzgerald, who aren’t as well known to history.

Having watched the movie first I had a certain narrative in mind going into the book and I should have known better. Truth told The Revenant film lives up to its “based in part on a novel of the same” description. While The Revenant isn’t nearly as bad of an offender as Brad Pitt’s World War Z, it definitely deviated from the source material and gave it a healthy dose of Hollywood, including a nice wrapped up with a bow Hollywood ending.

Without giving too much away, many of the characters presented in the movie are, in my opinion, nowhere near the same as their novel counterparts. This includes, but isn’t limited to, Hugh Glass (Leonardo DiCaprio), John Fitzgerald (Tom Hardy), and Andrew Henry (Domhnall Gleeson). To give an example, Hugh Glass is portrayed in the movie as some a white man gone native with a half-native son. In the book he is a former sailor who has set his sights westward because there is nothing left for him back home in the east. There is no native wife and no half-native son.

The variations between the book and the movie extend to the plot and entire story line. Basically, if you’ve seen the movie and are expecting the exact same story when you read the book you’re going to be disappointed. Are they both based in the west during the days of fur trading? Yes. Are they both gritty? Yes. If you remember the story line is different going in you’ll be fine.

In conclusion, I would say that if you watched the movie and you liked it for the idea of a story of survival, perseverance, and revenge pick up the book. I know I thoroughly enjoyed it, enjoying it enough to finish it in one day. Pick up a copy, read it through, and don’t skip the Historical Note at the end. I don’t think you’ll regret this read.