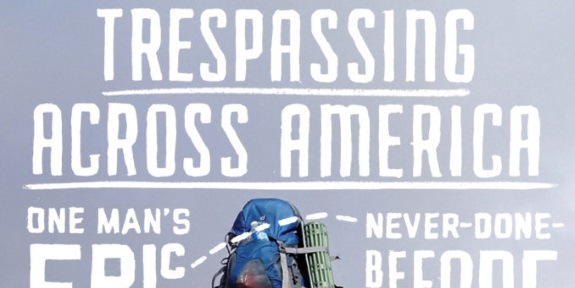 From Trespassing Across America III

About time to wrap up my series of quotes from Ken Ilgunas’ book Trespassing Across America. Two more but from much removed sections of the book. From Chapter 11, The Electrician:

It’s a cliche and misleading to say that we’re ‘transformed’ by our journeys. No one is ever really transformed into another human being. At the end of the journey, you’re more or less the same bundle of cells, memories, and values that you were beforehand. What changes, though, is that you’re able to make others believe that you’re this confident, capable, charming person (or some other set of uncharacteristic qualities).

I’m not 100% convinced of Ken’s argument here. While it is true that at the end of a journey a person is not physically transformed. Yes they are “the same bundle of cells, memories, and values“, but saying that the only change is “you’re able to make other believe that you’re this confident, capable, charming person” I feel is rather disappointing. Earlier, a section I quoted, Ken even states that “To travel alone is to force yourself to depend on others.” If you’ve never had to depend on others before in your life then suddenly depending on others is a stark change in a person.

I thoroughly believe that people can be changed, for the better or worse, by a journey. Look at all the different rites of passage that so many different races and cultures believe in and continue to practice. Each and every one of these can be considered a journey. You have events like a Bar/Bat Mitzvah, boot camp, graduation, hell even high school. Each of these could be considered a journey and a majority of the time the people that endure these types of rites of passage come out the other end as a much different person. I pity Ken if, after he finished this trip, he felt that he wasn’t a fundamentally changed man.

From Chapter 18, The Preacher :

But it is a false enlightenment to accept only those ideas that align with one’s worldview and reject those that don’t.

This quote is all too real considering the current political climate in the United States today. The citizens of this great country are divided more than ever in ever increasing polarizing ways. On each issue you have people who feel they are the enlightened ones for their understanding of a specific issue. This trait can be found on both sides of the isle. The idea of flat out rejecting the ideas of others when they don’t mesh with ours is something that does nothing but drive a wedge between the people of this country, and to a greater extent the world. We need to stop, listen, think, and then speak. Only then can we have true conversation and understanding.

That wraps up what I felt were memorable quotes from Trespassing Across America. Overall, I would say that I enjoyed the book. While I haven’t taken the time to write a more thorough review, I give it a 4/5.