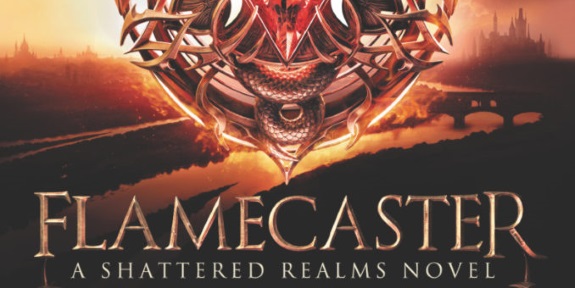 Flamecaster by Cinda Williams Chima
My rating: 5 of 5 stars

I’m a huge Cinda Williams Chima fan. Chima and David Wellington are the only two authors I follow religiously. My family always knows to check to see if either of these authors has released anything new when Christmas or my birthday comes around. I got my start with Chima with The Heir Chronicles series.

Flamecaster is the first in her new Shattered Realms series which takes place several years after the conclusion of the Seven Realms series. While you don’t necessarily have to have read the Seven Realms before reading Flamecaster it certainly wouldn’t hurt. The knowledge gained from the first series, locations, politics, history, etc., definitely help add to Flamecaster. Personally if I didn’t have that prior knowledge of the world I don’t think I would have enjoyed Flamecaster as much as I did.

I’m going to try to avoid getting too much into the plot and storyline in order to prevent spoilers.

Flamecaster is categorized as Young Adult and Fantasy. Usually when I think Young Adult I think teenage angst, coming of age, etc. While there are certainly elements of those things in Flamecaster it isn’t over the top. In many Young Adult books it seems that the authors concentrate too much on the Young and not so much the Adult. Chima, in my opinion, does a good job of balancing both. While the characters are usually younger, they aren’t so young that me, a 38 year old man, feel disconnected to them. There is nothing worse than a character tearing themselves up about the most mundane thing or how they’re so torn between choice A and B.

For me Flamecaster was a pretty easy read, as have been all of Chima’s prior novels. It only took me a couple days to get through it. The way Chima writes it can be difficult to put her books down and Flamecaster was certainly no exception. The story starts fast, maintains good pacing through the middle and finishes strong with, what I felt, was a rather interesting and surprising ending. I never would have thought that person was behind all the assassination attempts!

Simply put if you’ve read any of Chima’s prior works, especially the Seven Realms, then definitely pick up this book. Of all the novels she’s written I feel that Flamecaster is probably the best of the bunch.

If you’ve never read Chima before and want to get into Flamecaster fast, I’d start with the Seven Realms series and then come back to Flamecaster. If you’re not in a rush then I recommend starting with The Heir Chronicles, move into Seven Realms, and finish with Flamecaster.