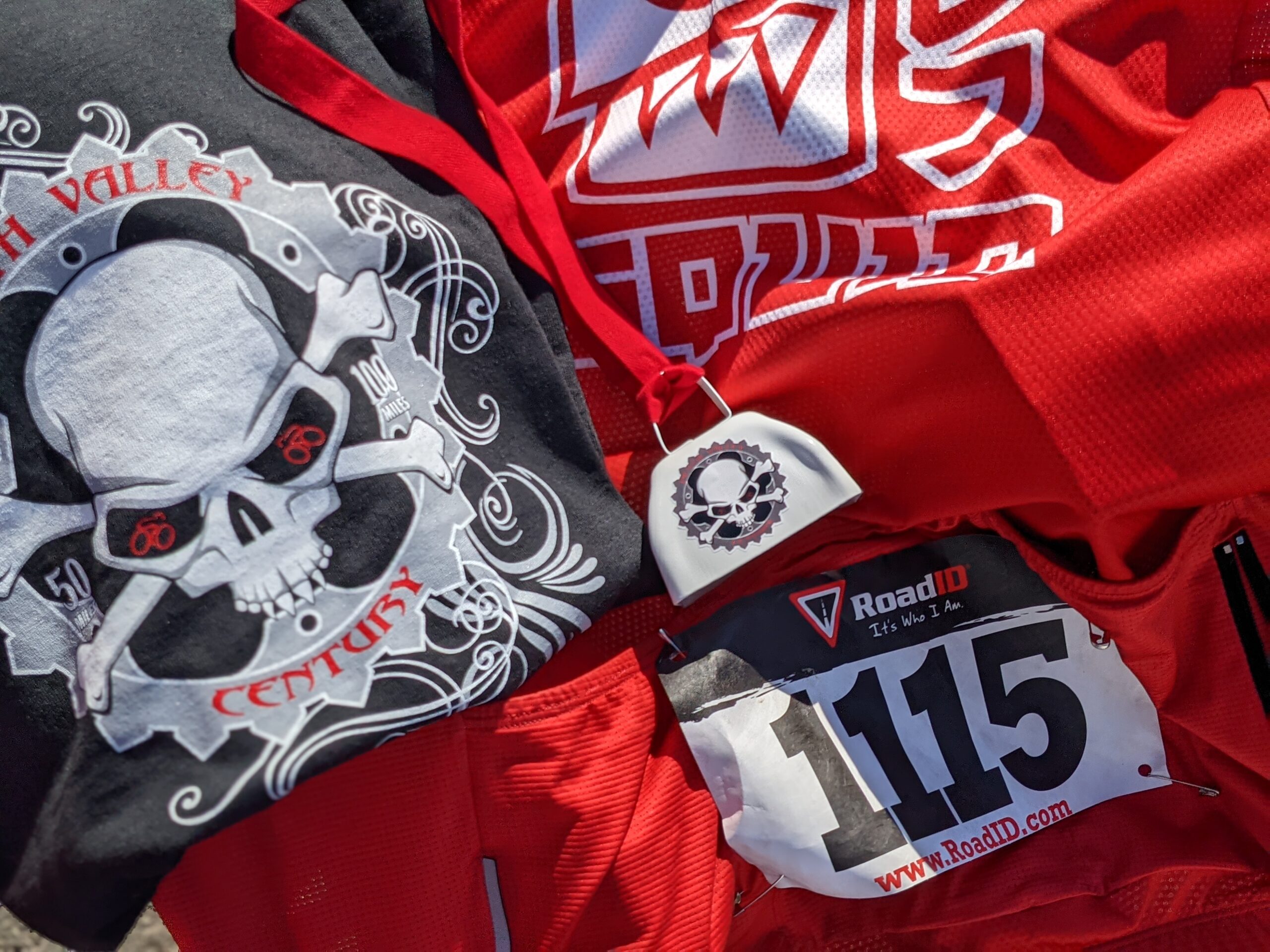 What a ride, what a first ‘organized’ event.

I’ve been eyeing doing Planet Ultra‘s Death Valley Century for a while. Last year’s was cancelled for obvious reasons. This year there were some riders from GVC who’d talked about going depending on how the weather worked out. By Wednesday morning the weather reports were promising so I pulled the trigger.

Friday after work, I drove out to Texas Springs Campground planning to crash out in the back of my car. My nice air mattress and sleeping bag worked a treat and I slept pretty well all things considered. Woke up a few times because of cold, only because I wasn’t always buried in the bag, and a sore shoulder, because of the way the head of the mattress sat.

This morning I woke up a couple hours before the planned start. First to-do was getting into my riding gear. Once in my bibs and base layer I added my jeans, a t-shirt, and flannel. Jumped out of the car and started working on breakfast, my second to-do. I made a nice bowl of oatmeal with all the goodies; pecans, walnuts, raisins, honey and peanut butter, mixed in. Great source of clean long lasting energy. It’s worked great for group rides around town, and knew it wouldn’t let me down. Since I couldn’t get a morning coffee I opted for a hot chocolate instead. Taking it back to old school camping days with the kiddo.

Breakfast done and dusted, I packed everything up and drove over to the staging area. Once there, I started getting everything else ready to go. Had to pin the bib onto my jersey, and get the goodies I wanted to take along with me. While I was doing all this John and Anna from GVC rolled up letting me know they’d arrived. With the bike all ready to roll I cruised over the start.

The start was staged with 20 riders being released every 2 minutes at the directive of the NPS. While waiting to start Jeff, another GVCer rolled up. I ended up rolling with the third group which was one behind Anna and John. Once underway it didn’t take long before I started passing people to catch up with John and Anna.

Once I jumped on Anna’s wheel, with John leading, we all rode together, for the most part, for the remainder of the ride. We made stops at not only the aid stations, but a few other stops along the way.

Stopped at Badwater Basin for the washroom and photo ops. I carried my bike down to the salt playa in order to get a photo with the sign. This is also where Jeff caught us and he started rolling with us for a majority of the ride.

After the southern aid station and turn around, Jeff started having a hard time keeping up with us and was just cranking out too many watts for the work he was doing. Jeff is usually a pretty strong dude and the numbers he was throwing out there made no sense. That’s when John pointed out that his rear tire looked low. Stopping, we thought it was a poorly inflated tire and Jeff and John pumped it back up using John’s pump. Unfortunately, it wouldn’t be long before Jeff was asking me how his rear looked. Pulling off again, Jeff and John worked together to get a new tube installed and, 4 CO2s later (don’t ask), we were underway. Thankfully it held for the remainder of the ride. Anna lead until the Golden Canyon trailhead where I took over until the second aid station near Furnace Creek.

After refueling at the second aid station, we set out and I took the lead for the next 18 miles until the turn onto Scotty’s Castle Road. During this stretch Jeff fell back to join his buddy, interestingly also named Jeff. Shortly after Jeff fell off we picked up a random rider.

Turning onto Scotty’s Castle Road signaled the start of the 7.5 mile 2,100 foot climb. I was able to stick with Anna and John until just after our brief stop at a water station. After that stop, I was feeling good, but started fading fast. Didn’t take long for us to agree to meet at the summit, and final aid station, and regroup. I’ve never been so happy to finish a climb. It was absolutely brutal. I was just going through the motions. No enjoyment what so ever.

After a nice break and refuel at the summit aid station we started down. John mentioned we’d regroup at the bottom and for me not to wait for them. Being the heavier guy does have its advantages from time to time. Sure it makes the climb awful, but the descent was pure bliss. 10 miles and almost 2400 feet in elevation lost in 20 minutes. Hit my high speed of 45 MPH along that stretch.

At the bottom at Beatty Junction I stopped and waited for John and Anna to roll up. Back together we head off for the final leg back to Furnace Creek. Lead duties were split between John and I. I took the first half and John brought us home, but not before one last stop at the Furnace Creek Visitor Center for a photo op.

Rolling into the finish we were greeted with everyone hanging out relaxing and enjoying each other’s company. Was presented with our metals, customized cow bells with the event’s logo, and snapped some pictures under the finisher’s arch. Grabbed a couple Cokes and a soaked wet, ice cold, towel which was amazing!

Rolled over to the car and started putting things away for the drive home. John brought his car over and we hung out chatting for a bit waiting for Anna join us after changing while hoping for Jeff to go by. Sadly we never spotted Jeff and the three of us all were tired and ready to head home and get some real food.

Drive home was pretty chill. Had to wait for a wrecker to load a SUV onto it’s flatbed. Seems like a couple guys picked the way wrong spot to do a u-turn and ended up smashing up their bumper pretty good. It was bad enough that the NPS and CHP had to close the road in both directions while the SUV was loaded up. Stopped at Taco Man Grill on Eastern for a pair of Spicy Shrimp Burritos to destroy on the couch while writing all this down. Looking forward to a chill evening and my nice comfy bed.