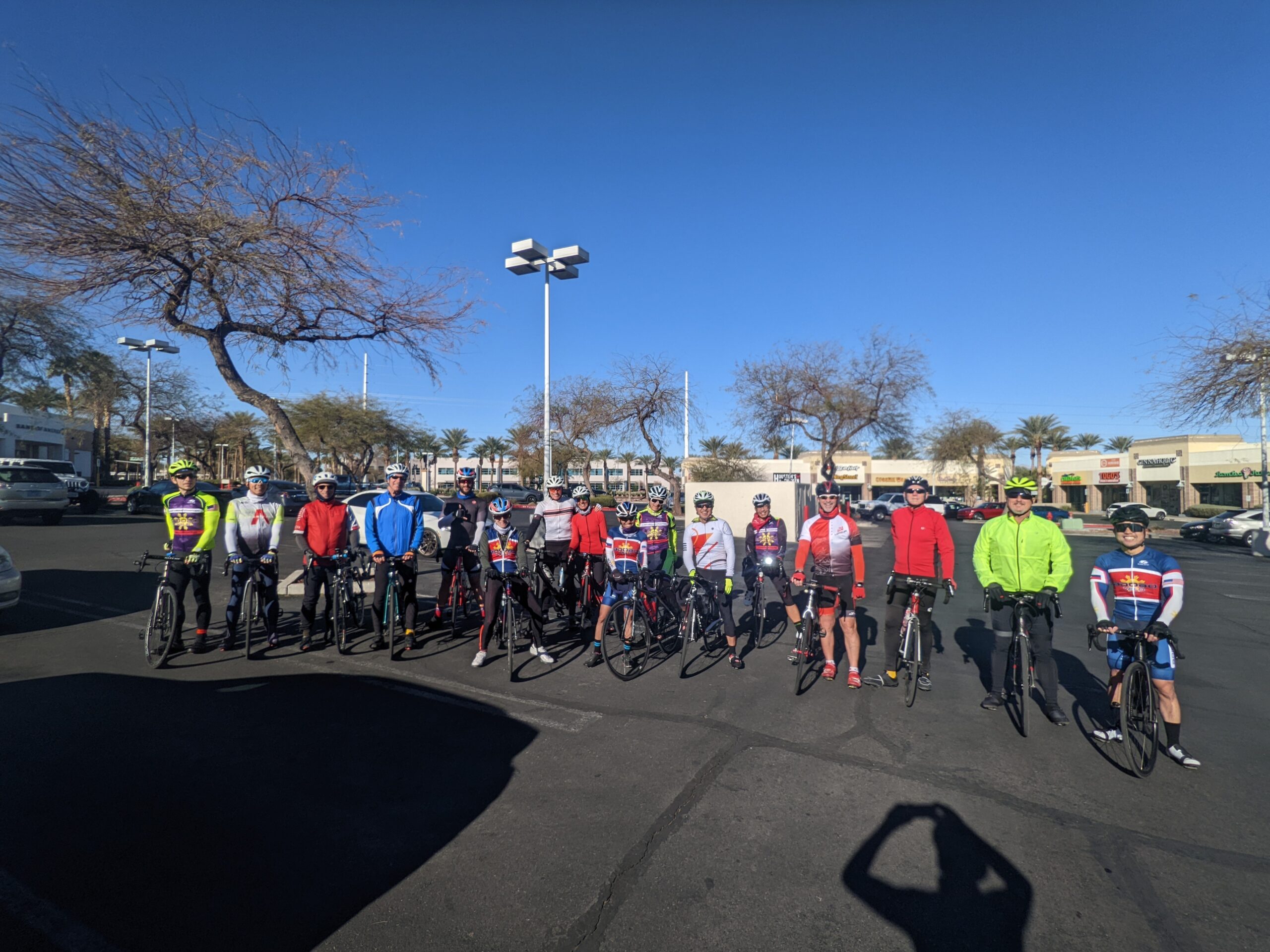 Stupid computer. Not only did it reboot 4+ times the battery completely died before I got home. Meh oh well just means I’ll have to ride it again sometime.

Had a great turnout for today’s ride and had a couple meet up early to ride down to the start. Cool thing is I ran into both on the way to Anthem Hills Park. Met up with Joy at Anthem Pkwy and Atchley. Then met up with Ken just after turning on to Reunion. Something cool about just happening to roll up on someone you know while out on the road.

Overall the ride went really good. I felt the stops were well spaced out, but if I were to do it again I would have stopped at Railroad Pass for a regroup and quick break versus in front of the Veteran’s Home. Then again it’s probably best to do both in order to do the airport loop as a group. Live and learn.

Really enjoyed the stop at the Terrible’s at Ville Dr and BUS-95. The store has a nice seating area with three tables with umbrellas which gave enough room for everyone to have a seat. With the beautiful weather it was hard to pull myself away. Could easily see myself hanging out there for hours just taking it all in.

Did run into Chris Fetter out along BUS-95 after our break. Stopped and chatted with him for a few while waiting for some of the stragglers in our group to make up the climb along BUS-95 before joining the RMT. Guess he was out with a small group, but I never got a chance to say hello to the crew.

Rest of the group ride went really well. Did get separated a couple times waiting for a straggler here and there. The group ended up doing a clockwise loop of LLV when the route called for a counter-clockwise, no biggie. Was funny to wave and holler as we passed each other by going in opposite directions.

Once back at Pebble Marketplace, gathered up the Anthem Hills Park Posse, and one more, and set out for home. We chose to double back over to Arroyo Grande via Wigwam instead of navigating the newly reconfigured Green Valley Pkwy. Our smaller group all still had plenty of leg left for the extra miles and it worked out really well. We lost Sommai as she continued south on Arroyo Grande while we went west on Paseo Verde. Next was Ken who stopped at Anthem Hills Park for a quick break before continuing home while encouraging us to head on leaving Joy and I.

Joy and I pretty much duplicated a route we’d taken a few weeks back. When we got to Bicentennial she asked about what I had planned. After sharing my plan to do some more miles in Inspirada and Sloan Canyon before climbing Democracy home. She asked about joining along and she hung with me until turning north onto Via Firenze.

Climb up Democracy went well and felt really good. Was kinda bummed when the Garmin died on me. Oh well can’t win them all. All the more reason for that 530 upgrade!