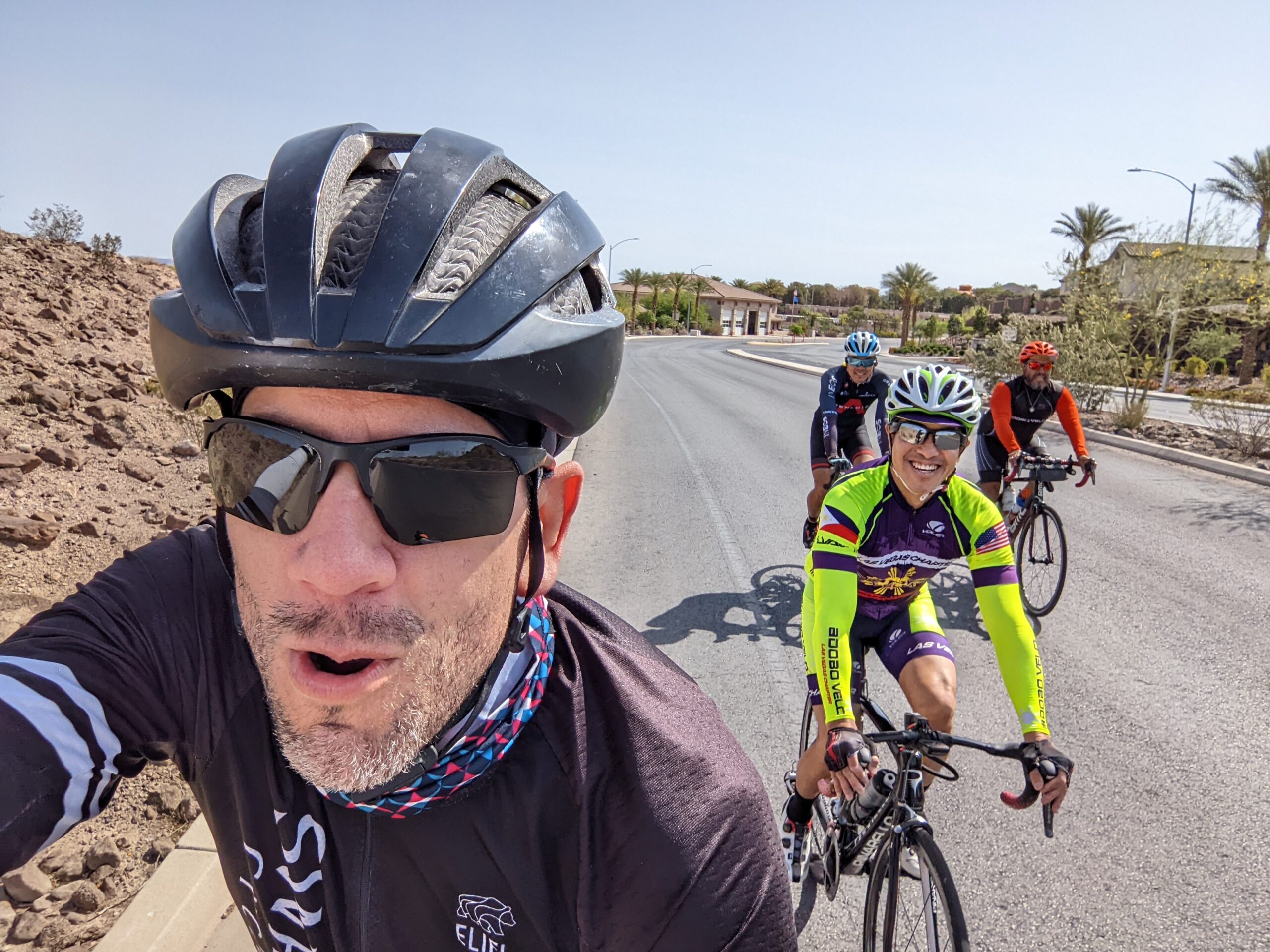 Say hello to my little ride!

Awesome day for a ride. Some northerly breezes which were stronger the further east we went, but I’m getting ahead of myself.

No commuting last week, due to afternoon winds, combined with yesterday’s DNF left me hurting for some miles in a serious way. Was happy that Adobo Velo decided to have their monthly birthday ride on an atypical Sunday. I also received a late night text from Mark asking about meeting at Anthem Hills Park to add some extra credit and of course I was in.

Got up early to get some breakfast in before heading out. Yesterday I’d thought of just grabbing some Pop-Tarts at the grocery for breakfast, but ended up busy with other things. So instead ended up with some avocado/guacamole on sourdough with a couple over medium eggs. Topped that off with some cold brew and milk. Awesome!

Fueled up I rolled out just before 7:00. Ride down to Anthem Hills Park was a nice way to get the blood moving and legs warmed up. The Somersworth ascent helps get that done quite nicely. Coming around Reunion I realized I was still a little early so I noodled around the east side of the park just relaxing and enjoying the ride. Came across another cyclist who was looking for, I believe, Mccullough Trail and unfortunately I couldn’t really help him. Did tell him that it was dirt and the tires he had on probably wouldn’t cut it.

Met up with Mark, who was right on time, and we set off for Crafthaus. Had a great time riding over. We kept a perfect pace to get to Crafthaus on time and carry on a conversation for the entire time. It was nice to have a chance to catch up. We haven’t had a chance to have a good ride together in a while. Unfortunately, this is also where Mark’s electronic shifting decided to DIE less than a quarter mile before we rolled in. Sure he was able to make it in the rest of the way, but his ride was pretty much done.

After some visiting and lamenting over Mark’s situation we rolled out. Mark rode with us south to the UPRR before turning west to return home while the rest of us went east. UPRR was nice. We kept the pace leisurely and I did my thing of sprinting forward at the crossings to activate the crossing light for the group. Usually works pretty good, but today had a someone who really pushed it along Horizon Ridge with several of us convinced they weren’t going to stop. Funny thing is the next crossing, at Arrowhead Trail, we had a lady who was MORE than generous stopping early to allow us to roll through. Honestly, I would have expected her to roll through and I wouldn’t have been upset in the slightest. Just boggles the mind to see such polar opposites in drivers within a quarter mile of one another.

Turning north onto RMT we were hit with the wind. We also got splintered into two groups. I fell back to catch some of the stragglers and give them a wheel to latch onto, but I didn’t have it in me to catch the leaders. After some confusion at the Equestrian bathroom I ended up back in front. We made over to Burkholder and turned north onto Racetrack. Once there we slow rolled some to allow a couple slower guys to catch up so we could pace line the rest. I stayed on the lead pulling everyone through the head wind all the way until Lake Las Vegas Parkway.

After a regroup we rolled down into Lake Las Vegas. Before rolling out of Crafthaus I’d talked about doing, what I’ve termed, a “Lake Las Vegas Figure 8”. While we’d agreed to do it I kinda failed at hitting the turn we needed and only did a single. However, about half the group ended up doing it while the other half rode on to Terrazza Park to await a final regroup.

Rolling out onto Galleria I’d shouted back, “This is going to get fast with this partial tail wind.” Once we got going we quickly caught two guys who started just before the rest of us, and we kinda dilly dallied around some. After passing Wells Trailhead Mike came around me and I hopped on his wheel as we made the small climb before the bend to go west. Once we started west I came around Mike and we started cruising again. We flew across Galleria. At one point I had Ken and Henry come around and I grabbed their wheel for a bit before coming around before rolling up to Boulder Hwy.

After Boulder Hwy our lead group stopped to wait up for the guys on the back. I was surprised to see how far back they’d fallen. I’d thought they were holding on to our freight train all the way across Galleria. From there we dialed it WAY back and cruised to Crafthaus.

We rolled into Crafthaus around 10:30 which is about 30 minutes earlier than we’d wanted to. We got everything setup to hang out: chairs, table, and gazebo. It was nice to hang out with everyone post ride. Usually I’m one to take off pretty quick after we roll in to return home. Even got Mark to come down and join us despite not riding. Then imagine my surprise when we found out we share a birthday!

After hanging out for 3 hours, closing our party down, I set off for home. Ride home was nice, uneventful, and I don’t really have anything to report. Looking forward to some more saddle time this week.