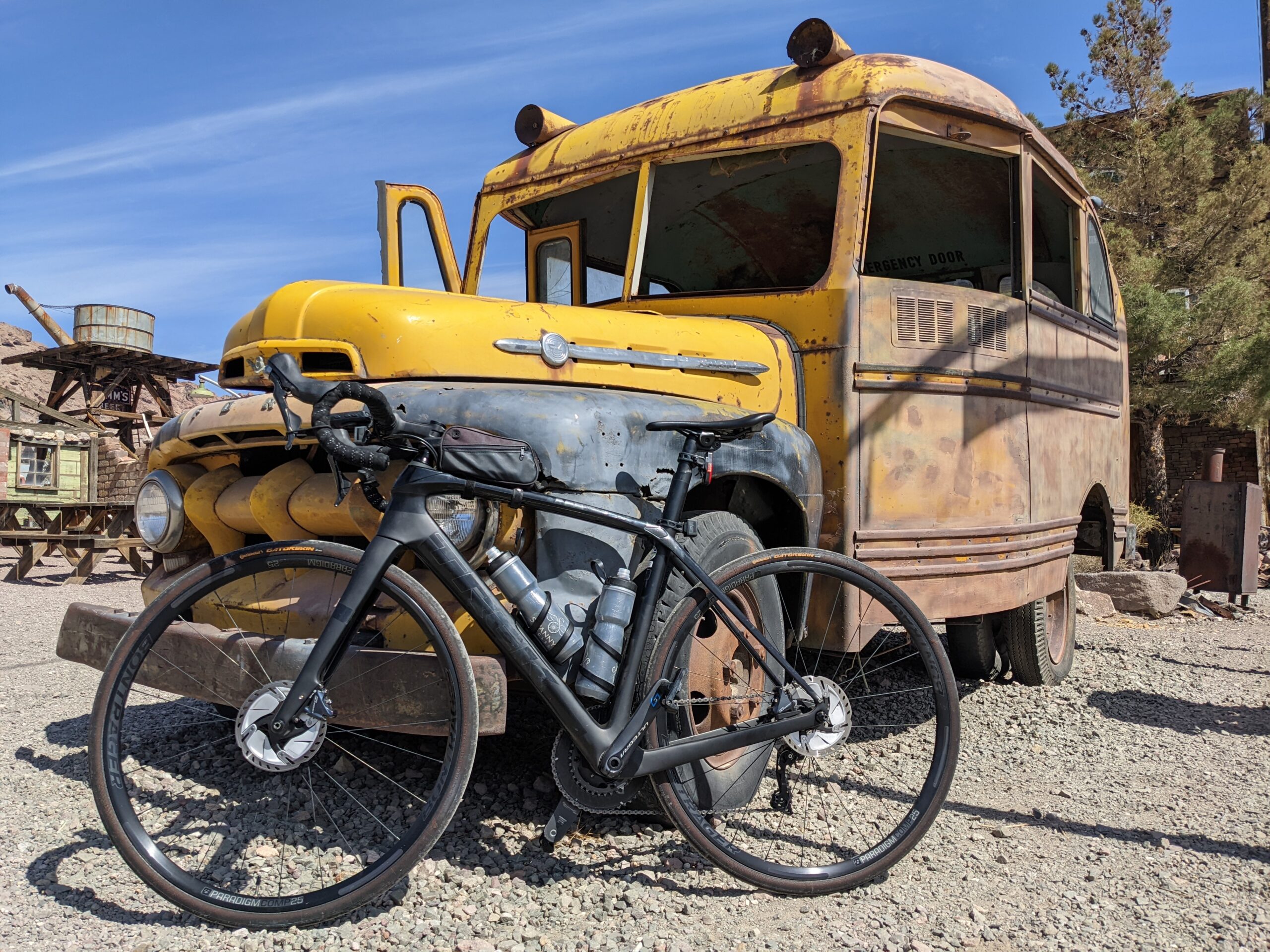 Keep calm and carry a wand.

Joy made me do it.

What a great fun ride that was. It started with a quick trip down to Anthem Hills Park to meet up with three other riders (Mark, Ken, and Joy) before continuing on to Pebble Marketplace for the official start of the ride.

We roll up and there are nearly 30 cyclists hanging around ready to ride! As we’re visiting and everyone is getting ready to roll out, Dave is across the way fighting with a flat. I believe, he was going to ride over from Mountain’s Edge Park but got a flat and drove over instead. He was struggling to get his tire set and when we thought we’d got it on it was pinched flat from all our effort. We swapped him again and this time the tube was twisted or otherwise just not sitting right. He threw his hands up, loaded up the bike, and decided to just call it a day.

I was asked to lead everyone out to the intersection fo Wigwam and the new UPRR trail extension. Not everyone was familiar with how to get hooked up to the trail so there was no objection from me. Less than a mile in someone gets a flat! A nice 5 minute break and we’re rolling again. The group got split because of the light at Gibson, and I hung back to make sure the second group got onto the trail without any issue.

Pretty sure the lead group slow rolled for us as we caught them at the Fiesta Henderson crossing. From there we were off and cruising. We made really good time up the UPRR to the I-11 frontage over to the Railroad Pass Travel Center. After a quick stop for the bathroom and top up water bottles we were off to head south out of town towards Nelson.

This leg of the ride started out fast. We were just SAILING down the highway enjoying the descent. Once we reached the flat we all lined up and kept rolling in a nice pace line all the way to the turn off. As we made the turn we stopped for a regroup as there were a few people who were still a ways off the back despite trying to keep the group together.

As we started the climb, a small group got out in front and a few of us slow rolled waiting for the rest of the group. When I got word that the ride leader had said to roll on I rolled on. Thankfully Kenny was the one delivering the message and not one to let a good wheel go, I jumped on it. Didn’t take long before it was Ken, Mark, and I all cruising head to tail up this nine mile climb. Had a great chat even though we were all struggling to make the grade.

Once we made it to the top it was a super fast descent down to Nelson. We were FLYING! It’s where I logged my 46.5 MPH high speed of the ride. Wasn’t long before I just started feeling a little sketchy at such speed on a totally unknown road so I started dialing it back a little. Then the road went from decent to garbage with some alligator skin and open holes. Thankfully we all made it into Nelson Ghost Town without incident.

We stopped at the store there at Nelson and everyone went ham to get some calories into them after the nine mile slog. Oh and pictures too! I joined in on the action grabbing a can of Dr. Pepper, Rice Krispy Treat, and granola bar. Took a few pictures too!

Rested and refueled we all mounted up for the painful climb up and out of Nelson. Boy was it. Nearly hit a 10% grade along that stretch. Once we reached the top, boy oh boy it was time to get stupid for the nine miles of descent to US-95. I’d been following Kenny’s wheel again and Henry caught us up on the climb as well. Once we crested we started putting down some power to get some speed. We probably averaged between 30-35 MPH for the entire ride down. The three of us kept rotating around one another almost perfectly. We came flying up on Caleb where I yelled out, “Choo choo Caleb get ready to get on this train.” That was followed with a holler at Joy of, “Hey Joy get on this fun bus!”. Caleb was taking it easy and chose not to hope on, but Joy jumped at the chance and told us later she had to dump some power in order to get on.

At US-95 we waited nearly a half hour for two final riders to roll up but only one did. Come to find out the one who didn’t make it broke a chain almost straight out of Nelson and returned to the store to wait for a SAG.

With everyone back together we formed another pace line for the ride north. I think we were doing a much better job keeping everyone together until the climbing started. Thankfully I was towards the front and had a couple solid wheels to hold on to. Didn’t take long until one rider, than another, and another dropped off to fall back. Sadly, the grade increases the further north you go and I think I burnt a few too many matches myself. Then here comes Caleb just flying past all of us. Watching that I knew that those on the front were going to get a fire lit under them and I wasn’t wrong. It was only a few moments later when I got dropped, but thankfully I had Mark to keep me company. A few minutes later Kenny passed the two of us and as much as I wanted to jump onto his wheel again I knew it wasn’t going to happen.

The hill climbing monsters stopped in the shade of the Boulder City Pkwy overpass waiting to regroup. As we hung out John rolled up and hollered that we were regrouping at Railroad Pass again. Didn’t need to tell me twice! We all started rolling and I’d rested enough that I pulled around because I wanted to get there. I had visions of Zingers racing through my mind! I’d been itching for them since we’d left the first time. I knew when we came back through that we would stop and I’d get those lovely little gut bombs.

Ride down UPRR was great. We were all flying again enjoying the descent. The Anthem HIlls Park Posse pealed off onto Arroyo Grande to start our ride back up to the park. We pretty much have a route we always take these days to avoid the worst of the traffic along Green Valley Pkwy.

We lost Mark at Summit Grove, and Kenny a little later at the park. This left Joy and I to do some more climbing through Anthem before heading home. Well both of us are like little Energizer Bunnies. We get a little bit of a rest and our legs spring back to life. We rode around to Bicentennial and both of us got a bug to go for a century after all being that we were so close. I threw out an idea for a quick route to put us over the top, we rode it out, and we both scored a century.

Feeling really good considering the heat and the distance. Looking forward to enjoying the remainder of the weekend.