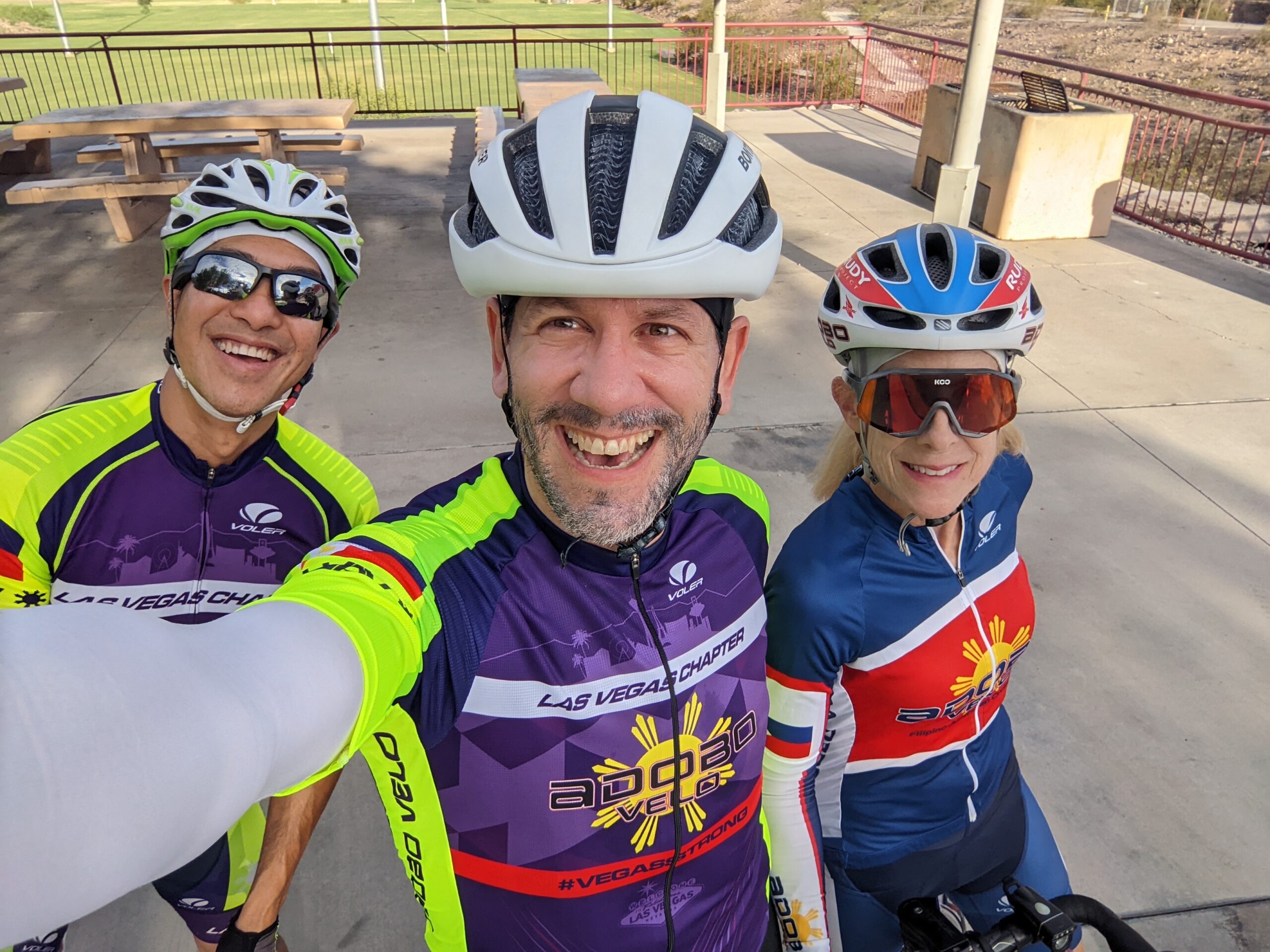 We’ll cross that bridge when we burnit.

Weather was a dream for the first half of this ride, but the second half was hot and sticky.

The official Adobo Velo ride started from Mountains Edge Park and planned on swinging by Pebble Marketplace on the way out to Boulder City. This meant I got to sleep in a little, enjoy a nice breakfast, and save some miles. I made a quick stop at Anthem Hills Park to pick up Joy, Ken, and Mike before the four of us rode on to Pebble Marketplace. Nice chill spin to wake up the legs.

We rolled up to find Caleb working on a flat. In hindsight this was a preview of things to come. While trying to get him fixed we went through two tubes before finally getting him ready to roll. This meant we rolled out much later than the anticipated 7:30.

The ride up UPRR was gorgeous. Weather was great with some clouds holding the heat back. Unfortunately, the trail had seen better days. Approaching Greenway Rd. I pulled ahead to hit the crossing signal. As I got closer I saw that there was a healthy amount of gravel strewn across the trail and almost dumped my bike going through the worst of it. I stopped, started waving and hollering to tell the group coming up to slow way down and use caution. Something similar would happen at the Arrowhead Trail and Paradise Trail crossings and random spots along the way. The worst was Paradise Trail when Joy took a spill when the entire group stopped trying to navigate the gravel. This would mess up her front derailleur and, after a stop at Railroad Pass, lock her to her large ring for much of the rest of the ride. Thankfully that was the only fall of the day.

The group made a stop at Railroad Pass for a quick water and refuel break before heading over to Boulder City. Unfortunately, the RMT was littered with gravel similarly to UPRR. Spots here and there that required everyone to slow down to pass on the single track.

The airport loop was fast as usual and the climb up the east side of Boulder City was the typical slog. However, I thoroughly enjoyed the new, to me, ride on the west side through Little Italy. I’ve ridden through the neighborhood along the east side of Boulder City Pkwy (formerly US-93), but never the west side. In the past I would turn left onto Boulder City Pkwy and climb to Industrial. Was cool to experience a new part of the city, but wow lots and lots of climbing.

Regrouped at the top of Industrial and the group decided to continue back to Boulder City Pkwy instead of returning along the RMT. As we started riding my legs started to loosen up and I started making my way towards the front. Finally caught up with Jeff who was just motoring. With my extra weight helping me I went past him as made the final descent. After making the right onto Boulder City Pkwy Jeff just FLEW past me and, not wanting to miss out on a fast wheel, I jumped on and he just crushed it all the way back to Railroad Pass.

As we were rolling up to the stations someone came up behind me and said, “Hey Elvis I think you’ve got a flat?!” I look down and to my surprise my rear was going flat. Riding with Gatorskins it’s pretty rare for me to get a flat. Imagine my surprise when running my hand through the inside of the tire I feel a monster of a nail. Thing was probably close to an inch long. Thankfully I was able to make quick work of it, and was ready to roll as everyone else was finishing up.

Made another on-the-fly route change. To avoid the gravel and debris along UPRR on the way back we thought taking the I-11 Frontage/Dawson Rd to Paradise Hills and along the east side of Henderson to Horizon would be the better way to go. And it was except for the 50 foot section of Dawson Rd that was completely destroyed. Few people rode across and several more walked across the damaged section. Thankfully after that it was mostly clear.

Once we reached Horizon things went much smoother up until Jeff got a flat at Canyon Rd. He made quick work of it and the group agreed to a final stop at a Chevron after making the right onto Horizon Ridge. I was SO disappointed when I could find my Raspberry Zingers. Ugh. All that work and no Raspberry Zingers.

While we were stopped, I took the opportunity to work out with Joy, Ken, and Mike what our plan was. Mike was going to head on to his parent’s place, and Joy wanted to stop by Swanny’s and have her derailleur looked at. So we set off to conquer Horizon Ridge which is a stretch of road I absolutely hate, especially going west. I told Ken I would rather Paseo Verde across and climb Green Valley than climb Horizon Ridge. The climb just feels so long and the surface is just awful. I’ll also add that I think this is about the part where my legs were done. I wasn’t bonking, per se, but this ended up being my longest ride since getting back on the bike.

Joy rolled into Swanny’s well before me and thankfully Zubi was kind enough to get started on it straight away. I relayed that we had adjusted her limit screws in order to lock her into the large ring, and Zubi was able to get her right as rain in no time.

Then it was time for the final nine miles and 850+ feet of elevation to get home. At this point I had little to nothing left in the tank. Feel kinda bad for Ken and Joy. They were both still raring to go and had plenty left. Joy was just a machine and would attack the climbs like they were nothing and have to stop to wait for Ken and I to catch up, but I think Ken was holding back to not totally leave me in the dust. This pattern continued until Ken split off to head home leaving just Joy and I.

She was just so strong that she would get out ahead of me, then stop to wait as I crawled my way along. She was quite gracious about the whole thing, but it just bugs me personally. I think most of us can relate that we HATE bringing up the rear. Joy was itching for MOAR climbing so she chose to follow me up Somersworth. When she wasn’t certain on how to get home I told her to just stick with me. Joy finally got to see the awful climbs up to my place. I turned her loose at the end of the block and gave her directions on how to get to Democracy. She assured me she knew the way home from there.

Once I was off the bike I was very well done, borderline burnt. I opened the garage, leaned the bike up against the wall, and went over to the side of the house and laid down for a bit. Took off the shoes, socks, and jersey and enjoyed the breeze. A few minutes later the kiddo came outside to chit chat about her morning and visit. 20 minutes later I felt good enough to wander inside.

Overall the ride was a great ride. Satisfied with my performance considering this ride was 13 miles longer than my ride on the 24th which, at the time, was my longest since getting back on the bike. After the past couple weeks of commuting I can certainly feel my fitness level is improving. It is certainly no where near where is was before I left for Canada, but at least I can feel an improvement and know there is a light at the end of the tunnel.