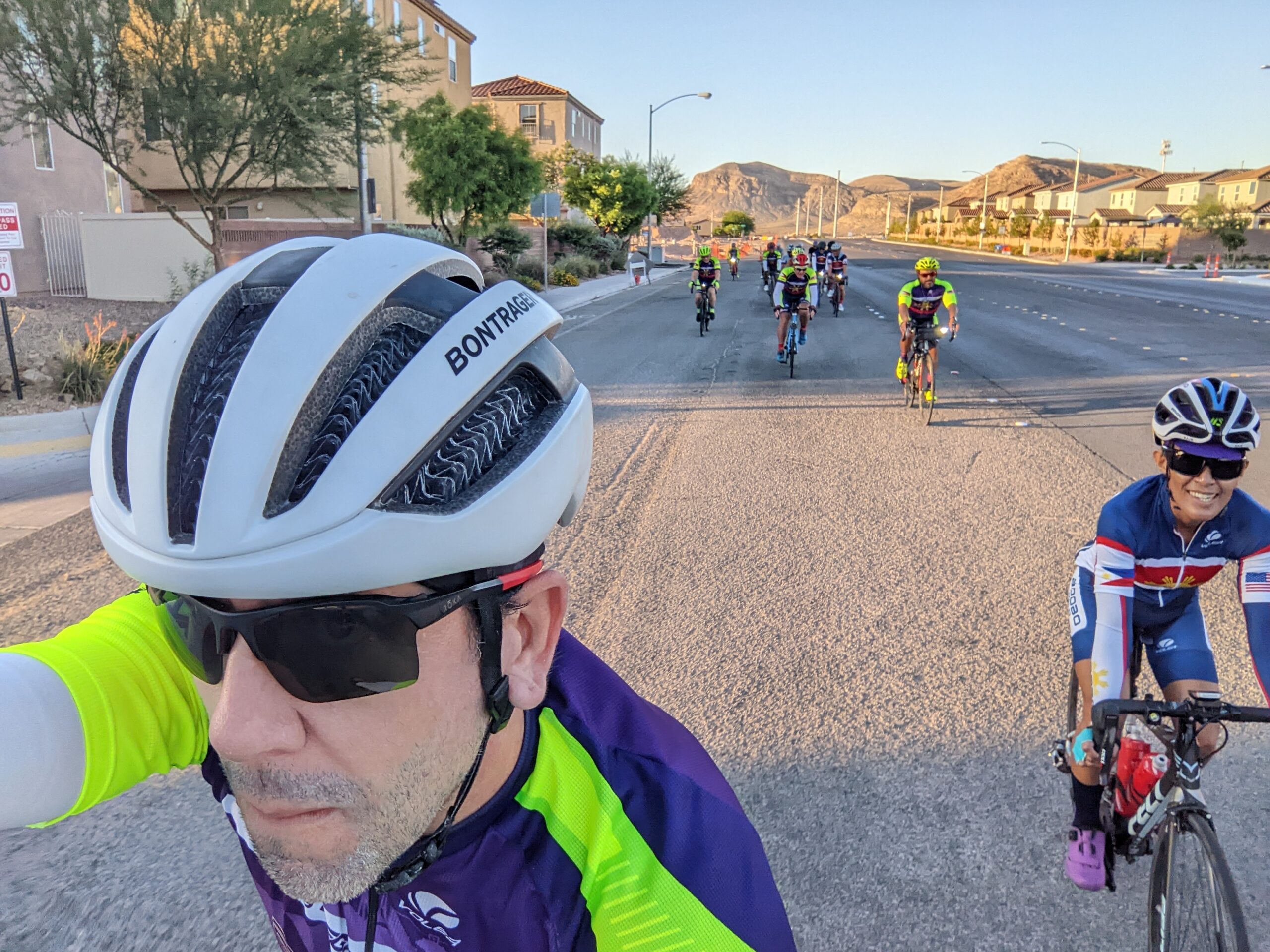 Am I about to feel really, really stupid?

Well that was brutally tough and there were multiple times I thought about calling for a pickup. I don’t know how but pushed through and finished. I also feel this is another case of Bandok coming up with a perfect title, read on and I think you’ll agree.

Ride began with a super early start. Knowing how I felt after last week’s ride I felt up to actually ride over to today’s start at Mountains Edge Park. I hit up my boy Mark about a start time and he told me 5:00 a.m. from Anthem Hills Park.

Of course I tried my damnedest to get to bed early only to wake up multiple times throughout the night. The last time was at 2:30 a.m. and I knew there was no way I was going back to sleep so I just got up. Had a nice breakfast of a double serving of overnight oats and a large iced coffee. I went ahead and got all ready and rolled out early. Along the way to meet up with Mark, I chose to venture up into one of the neighborhoods to chalk up a few more Wandrer miles. Nice way to get the legs all warmed up and ready for the ride.

Met up with Mark at straight up 5 and we set off to meet up with Joy at the corner of Volunteer and Via Inspirada. We arrived a few minutes early, but Joy was ready to go. Right out of the gate she was just cruising. We cut through M in order to pick up Sommai and by that time Jon had caught us up as well.

From there on over to Mountains Edge we were moving. Like holy cow the main ride hadn’t even started yet and everyone was gun ho. I just fell back in line and did my best to keep up.

We rolled into the park just before 6. Unfortunately there was some confusion about the start location and we had to wait longer than expected to get underway. 30 minutes later and we were ready to roll.

Not entirely sure how, but I found myself towards the front of the group. I knew we were going to do a Red Rock Loop and the last time I did the Blue Diamond climb things didn’t go well at all. That was about 6 weeks ago. At that time I got dropped, badly, and aborted the remainder of the ride at the Blue Diamond Terrible’s.

This time was much more different. I was able to stay up with the front 3-4 wheels for not only the Blue Diamond climb, but for a majority of the loop. We did settle into a solid group of six riders with Jon, David, and Jeff doing the majority of the work. Did eventually get dropped but only after maintaining 256 watts and 183 bpm averages for 20 minutes (new eFTP, BTW!).

Thankfully the group pulled off at the overlook. Think they had thought to wait and regroup with the main group we’d left behind, but we eventually decided to just press on to the Terrible’s at Desert Foothills and wait for the main group there.

Jeff had already set off early. He was on a mission for some coffee at Dunkin’. I was cruising along pretty good trying to catch him up. I felt surprisingly well and recovered after the earlier massive effort. It didn’t take long before the last four of our group to just STEAM ROLL past me like I was standing still. Had to dump 700 watts to accelerate from 24 to 30 to catch on to their tail. Not too much later we were gaining on Jeff at a pretty stiff pace. I started yelling and hollering at him that we were coming hoping he’d be able to start putting on some steam to hook on. He was able to pull up to our wheel easy enough and we just put the hammer down to Desert Foothills. Hell I was even feeling spry enough to take a couple pulls up front.

After our rest, refuel, and regroup we set off. It was at this point the fatigue was starting to creep into my legs. I definitely wasn’t able to put the same power down along the climbs as I’d been doing earlier. Lucky for me we had a ton more climbing to do! Yay!

Villa Ridge/False Drive was awful as usual. My lord why do I sign up for the rides that involve that god forsaken climb? Things started off ok with keeping with the mid-pack, but it didn’t take long for them to pull off and leave me behind. I am happy to report that I did “finish” the climb by going to the top of Clear Meadows as well. Will say I had contemplated NOT doing that little kicker until I hit the “flat” before the end. Little victories.

Next nightmare was Far Hills. Today was a ‘Taco Ride’ and where is the taco truck that we’re aiming for? At the VERY TOP of Far Hills of course! This climb would be a taste of things to come. Managed to keep a 6-7 MPH pace until the end when it fell to 4-5 for the final half mile.

After everyone had their fill of tacos and cane sugar Coke (I skipped), we rolled out. Thankfully for the next 23 miles the route was mostly downhill with only a couple small kickers. Did make three stops along the way back. First was at a Green Valley Grocery near Sunset and Hualapai for a quick rest and refuel. Second was at Mountains Edge Park to end the “official” ride and say our goodbyes. Third was near the corner of Cactus and Southern Highlands Pkwy to wait out Jon’s cramps. Thankfully after a quick shot of Himalayan Salt and a break he was ready to roll out.

We all stayed together until Valley View when Jon peeled off to head home. This left Joy, Mark, Sommai, and I. Joy was just off like a bullet on the climb up to St. Rose. I was seriously running low on gas but was able to hang on to Mark’s sympathy wheel. I almost positive he was hanging back to help me out.

Once onto St. Rose the minor downhill to Las Vegas Blvd made my legs come to life so I jumped out in front for a bit. As we rounded the corner onto LVB we discussed stopping at the Green Valley Grocery but opted not to and made the turn onto Volunteer. In hindsight, it probably would have done me some good to have stopped for water and fuel break.

This is where we lost Sommai who had parked at the M leaving Joy, Mark and I. Among the confusion of Sommai pulling off I’d pulled back in front and stayed there until the mid-Volunteer dip. After that the climb slight climb started and my legs were like, “Yeah no dude.” It was at this point I mentioned to Mark that this is the reason I hadn’t been riding over to starts of several group rides lately. I just KNEW the extra miles would catch up to me and wouldn’t you know it, today they did.

Joy peeled off at Sebring Hills leaving Mark and I to climb Hampton. As we turned onto Anthem Pkwy I even said, “Come on legs don’t fail me now.” to which they replied, “Ok a$$hole put you’re going to pay later.”

Turning on to Hampton I was dead. Best I could muster was 6-7 MPH. At one point even telling Mark, “Hey man you don’t have to wait up on me if you’ve got to get going.” He was nice enough to say, “Nah man I’ll stick with you until Anthem Pkwy.” Lucky for Mark I cut him loose at Pine Prairie to work my way to Alyssa Jade and on to Anthem Pkwy.

At this point I was seriously hurting. I think the combination of pushing to hard on Hampton to ‘hang’ with Mark and no longer having him to keep my mind occupied did me in. From here on in it was the 34/34 show at a blistering 4 MPH except for the brief downhill section along Anthem Pkwy and again on Solera Sky. It was along these stretches I’d considered stopping for a break or for a pickup, but I knew if I took a break I wouldn’t be able to start again and a pickup call would take too long so the suffer-fest continued. If you zoom in enough you can see how bad I was struggling with my path wiggling left and right at 3 MPH.

I rolled up to the house and couldn’t be more relieved. I was 100% ded. I opened the garage and I couldn’t be happier to see my daughter’s car wasn’t there. I rested my head on my handle bars, closed my eyes, and started walking toward the entry door. I set the bike down on the floor, opened the door, walked the eight feet into the living room, and just laid out on the floor. THANK GOD the wife was right there and IMMEDIATELY asked, “What can I do?”

She started by getting me taken care of and stabilized. Brought me a cup full of ice that I stuffed into my bibs. Then a couple cold wet rags to go around my neck and head. Had her pull off my shoes and a couple more cold wet rags went onto my feet. As I lay there she offers to get my bike put into its stand in the garage and I ask her to bring my Garmin in as well. I wanted to get the ride “Done” and uploaded so no one would worry about if I’d made it home safely or not.

And there I lay for the next HOUR! While I lay there I shot the breeze with the little darling. Later I tried to move some and ended up having a massive cramp in both hamstrings and later on in both calves. My legs had said earlier I’d pay and they weren’t joking, almost took me to tears. Took it slow with a little water and Gatorade here and there. Made my way from lying flat to sitting up and eventually on to my own two feet.

Went into my room and peeled off my gear. Only my bibs, jersey, and base layer at this point. Everything else had some off post haste when I hit the floor. My derriere is wrecked. Think my chamois got all bunched up and shifted around, but only really bad along the left side. Amazingly no saddle sores that I can tell.

Overall, despite the pain at the end, today’s ride was a good one and the positives far outweigh the negatives. I do have a recovery ride planned for tomorrow morning down in Inspirada. Have a few roads I missed the past two Sundays for me to have ridden the entire “lower” neighborhood. In the mean time it’s just about time to head down to TacoMan Grill for some dinner!!