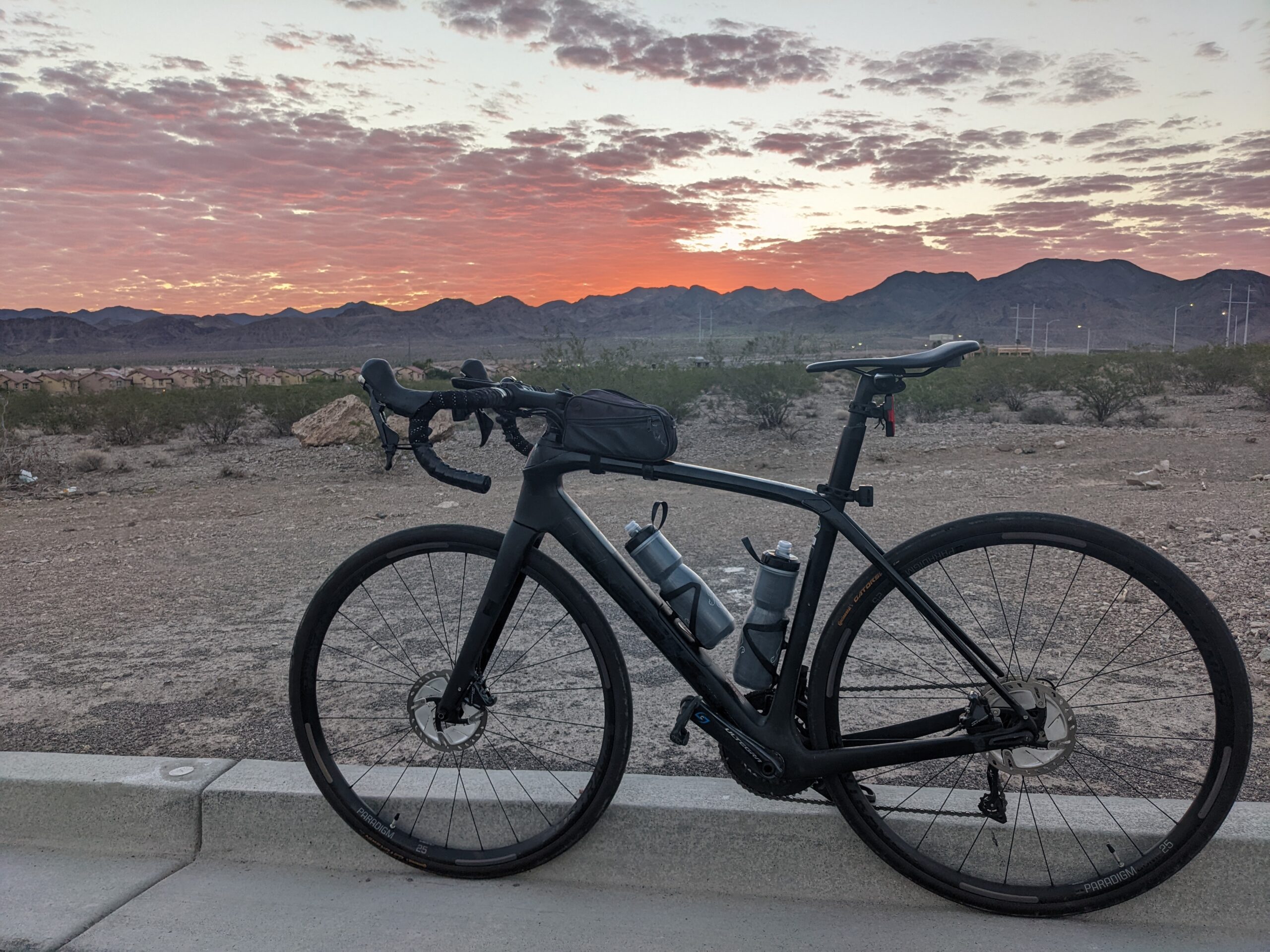 Published by eprowe on September 1, 2022

Today is a work from home day. I think I mentioned earlier that my 2nd floor AC is out and today they’re scheduled to come fix it. Instead of taking the day off I asked if I could work from home instead. Unfortunately, that meant no commute today. To make up for that I decided to hit the asphalt early to get some miles in.

I planned out this route knowing I’d hit the road early. Being so early would be a great opportunity to travel some usually busy roads. I chose to tackle a large chunk of Eastern which I normally wouldn’t ride because of how busy it gets. Today it was no issue at all.

I also have been wanting to try out the new section of UPRR which runs from Pecos to Arroyo Grande Sports Complex. It was logical to just extend that ride all the way out to RMT. I will say that the new section was AWESOME. Need to name it the “UPRR Cycling Expressway”. It’s 2.5 miles of uninterrupted trail with a gradual (-1%) decline. It is not hard to get moving and it’s exempt from all the major road crossings. You can just GO until you come to the intersection of Pittman Wash Trail which is signed as “trail end”. It’s very similar to the UPRR section between Nevada State Dr and Arrowhead Trail but it is smooth as silk, except for the under crossings which get a little bumpy.

After that it was all just plain standard UPRR all the way up to RMT where I decided to turn around and start back. As I was climbing I thought I could have done a Railroad Pass/I-11 loop but decided against it.

Along the way back I took a couple detours to snag some more miles on my Wandrer quest. Detoured through some of Nevada State and the Mission Hills neighborhood before bombing down College Dr back to UPRR. Left UPRR to make the Casady Hollow “comb” real quick before cruising over to Green Valley Pkwy. Tackled a few other neighborhoods around Sandy Ridge Park while stopping to leave the kiddo a quick message when she finished up with school. From there on home it was pretty run of the mill while taking a few detours here and there to paint some side streets.

Overall it was a fun ride. Goal was to hang out in zone 2 which I did for 70% of the time. A nice LONG endurance ride to try to get my endurance legs back under me. It was nice to get home after such a long ride and feel awesome versus on the verge of death. Now for a day of work while relaxing. Hoping to get hooked up with a group down in Rancho Cucamonga for a group ride while I’m there this weekend.