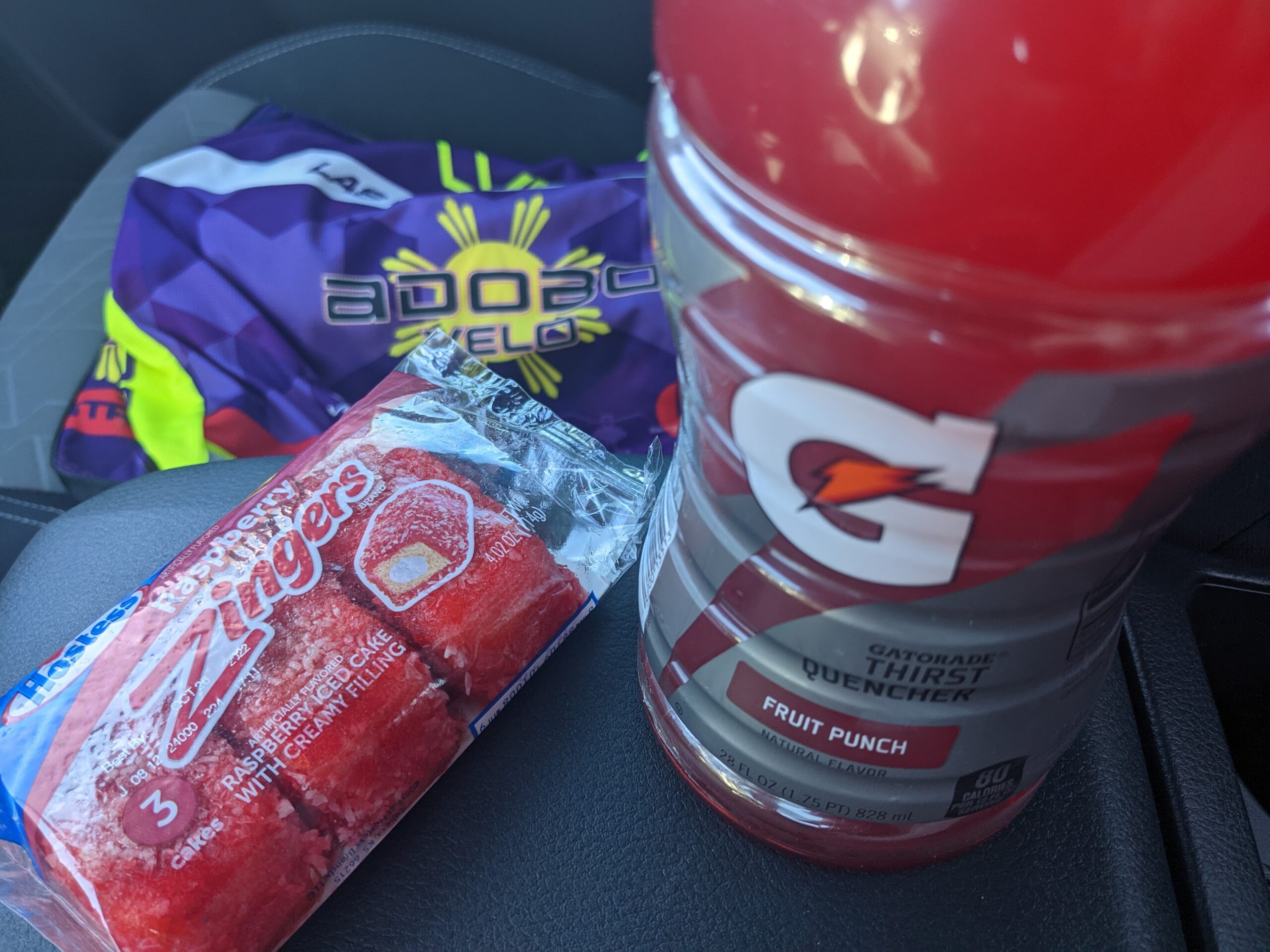 Did I earn them Zingers? Damn straight I did.

A casual conversation with Caleb Sprayberry about exporting/importing route maps from/to Garmin/Strava hatched the idea for some extra credit for the AVLV Picnic Ride. Caleb would be coming over from Pahrump like he usually does, but he’d wanted some extra miles and had planned on riding from the Blue Diamond Terrible’s to the picnic and back. When we first started talking about his idea he’d planned on going up Red Rock to get there. After some tinkering I came up with the idea to go east to Fort Apache and north through the west side of Summerlin instead. Seemed to be a popular choice because Joy rode over from her house in Inspirada and took the same stretch.

At first we’d agreed to roll at 5:30 in order to make it to the park by 6:30 with the picnic ride scheduled to roll at 7:30. We also decided to post the extra credit to the group’s Facebook page for any takers. Then Caleb did some digging and found check-in for the ride started at 7:30 and the ride itself at 8:30. Easily enough we simply added an hour to our start time and updated the Facebook post.

I rolled into Terrible’s around 6:00. This gave me plenty of time to finish getting ready and enjoy the last of my breakfast. I was surprised by how cool it was, and Caleb agreed it was pretty cool considering what the forecast afternoons temps were supposed to be. Thankfully, once the sun started putting some color in the sky the temperatures started rising and made the ride to the picnic quite enjoyable.

Arrived at The Vistas Park in just about hour like we’d wanted. This was my first AV picnic and I was surprised how many people from out-of-town showed up. Think there were more riders visiting from Rancho Cucamonga, with their sea of pink shirts, than riders from Las Vegas.

Rolled out right about on time. Made my way to the front with a few of the Vegas regulars. We were having a nice chill ride towards the Overlook when a SAG car rolled by asking us to slow up because we were already dropping some folks. Our little lead group slowed up and then eventually I let the lead group roll off and I fell back even further riding along with Ken Phan. The pace was much slower than I’d expected, bu still had a great time visiting with Ken and leading out our small group to the Late Night trailhead.

Arrive at Late Night and grabbed a couple snacks and visited with the lead group who I’d dropped back from. Waited around for a bit until rolling out thinking that everyone who had left the park with us had made the turn around.

As I was approaching the highway I spotted three riders hanging out while one of them was working on his bike. Guess his seat post had come loose and he needed to get it reset. They weren’t in AVLV kit so I figured they were from out of town so I hung out with them wanting to make sure they got back to Red Rock without issue. Once the one rider was ready we set off on the descent back to Red Rock. Made pretty quick work of that short stint and didn’t have too much trouble making the left turn. We did have to wait for a second cycle of the light as we’d had one of our small group fall back and not quite make it through the light with the remainder of us.

Regrouped on Red Rock, our small group set out. I took the lead and pulled until the Overlook where I pulled off thinking they’d want to stop for food or water. We did pass a couple other groups of riders along the way working on a flat. I made sure to holler asking if they had it handled and, after they said they did, we pedaled on.

At the Overlook I was surprised to have some of the riders who had been out front roll in after us. Come to find out that the flat we’d passed was Joy! Either way we all decided to roll out at about the same time. This time we had a group of maybe ten of us all from Las Vegas. Ken and I were in the pack of this small group when David Burns, Joy, and Al started to get a gap going out front. I yelled up to Ken asking if he we were going to bridge that and he replied, “We can but it’s going to be a lot of work.” I got out of the saddle, rolled past him, and said, “Well then we’d better get going.”

The two of us really smashed it. I took the lead and when I started to falter just a bit, Ken timed it perfectly to come around and give me a breather. Then a bit later when I saw his legs bobble a little I came back around him to take a pull. When I came around I saw that the group was just right there and I dug and screamed and hollered trying to get my legs to pull us up. Was so excited when we finally grabbed on to Al’s wheel.

From there we hit the descent down like a freight train. We were doing pretty well until we came up on some modified scooter clown car things that were driving in the bike lane. Then to make matters worse it seemed their leader had been cycled to the back of their group so they were in complete disarray trying to get lined back up. At one point it felt as if they were coming to a complete stop just to get this sorted, all while taking up not only the bike lane but travel lanes as well with their shuffling.

Made it back to the park with plenty of time before the food arrived. Had a great time visiting with everyone and enjoying some awesome food! Sadly got skunked in the raffle, but, honestly, there wasn’t much being raffled that I was interested in. I already have a helmet I love and plenty of water bottles. Maybe one of the lights or other small bits would have been nice, but oh well.

At about a quarter to two Joy and I decided to roll out together. We rolled down Park Vista to Charleston before going our separate ways. She claimed to not have another Overlook climb in her and I didn’t want to climb up to Terrible’s from Fort Apache.

Left to my own devices I decided to put on some pain and really give it a go on the way back. I felt like I’d been a slacker for much of the day and wanted to stretch my legs and get some work in. Felt really strong and fast along the way back and that’s where most of my PRs came from.

Overall, the ride was a good one and I had a great time visiting with everyone who came out. Looking forward to a nice chill day today, Sunday, before hitting the pavement again for tomorrow’s commute.