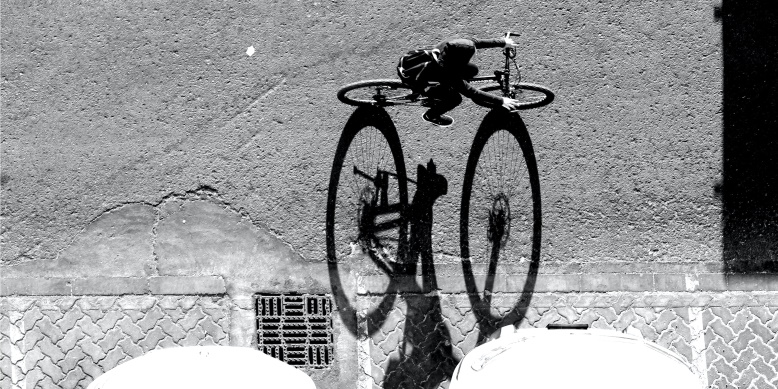 The lower mercury is making it harder and harder to get out and ride. I have to remember that once I get out and going it isn’t as bad as I think it is while laying in bed.

Left the house earlier than I should have and rode up to PTs at 7:00, a half hour before the official start. Instead of stopping and turning into a Popsicle, I took a detour through some of the area neighborhoods for some Wandrer miles. After my Wandrering I rolled up with 10 minutes to spare and it was just right.

The ride over to Lake Las Vegas was nice. Jumped to the front and chatted up Jon while co-leading the group. We’d left with nearly 30 riders in tow and kept the pace relatively reasonable. Jon was trying really hard to be on his best behavior to not drop anyone being the “leader” of the ride. He done good all the way through Terrazza Park.

As we cleared the round-a-bout on Lake Las Vegas Pkwy I asked Jon if we were doing the “big” or “small” loop, and despite my trying he stuck with the small. I really pushed myself on the clockwise loop trying to put in a solid effort. As I made the descent to the second round-a-bout I was tempted to take the left, double back along Highland Shores, and do a figure eight. Instead I made the single clockwise loop into a LLV/CW/CCW segment instead. As I finished doubling back at the round-a-bout I yelled at those riders coming towards me to go on to Tarrazza park. I didn’t want anyone getting confused and following me on my extra loop. Thankfully it worked perfectly and I was, I believe, the only one to do the double.

After rolling in last to Tarrazza Park, I was afforded a quick break before we were off again for the ride back to PTs. It was along the ride back that things got a little spicy. Good ole Jon always enjoys chasing something so Joe and I obliged him by leading the group out along Galleria until along Wells Trailhead when Jon and Dave Burns come swinging around for the climbs and bringing Joy with them. Not quite having fully recovered from the LLV climbing I was more than happy to sit back on a wheel and do my damnedest to hold on.

After the brief Galleria climb Jon dialed it back some as we continued west before heading south onto Water St. As we all started lining up the pace started slowly climbing all the way up to Warm Springs. Once we made the turn onto Warm Springs we continued to speed up until we were moving at a pretty good clip. We started slowing as we approached the red at Eastgate, but it went green right before we would have had to come to a complete stop. It was at this point that Caleb decided to jump the entire lot of us and opening a significant gap leading up to Gibson. At one point I came around and put in a sprint effort to try to bridge over to him. Unfortunately, it wasn’t enough but the light at Gibson was the ultimate equalizer being red for the left turn.

Riding up Gibson, for me, was relatively chill. My silly little sprint had taken out my climbing legs for a bit and I was happy to watch Jon and Caleb pull out to the lead. We’d talk later and Caleb said he was hoping that he was taking something out of Jon to get him to tire out some. Don’t think he realized that tiring Jon out is damn near impossible.

We continued working our way back to PTs at Horizon and GVP, zig zagging out way through different neighborhoods looking for the quietest and smoothest roads. Jon did a great job keeping us on the good stuff until the unavoidable Horizon Ridge. I can’t wait until the city finally decides to rip up the ENTIRE thing and repave it.

Finally rolling in to PTs, we chatted for a bit in the parking lot before migrating inside. We’d thought about hanging on the back patio until realizing it was in the shade and many of us were already getting cold on account of being sweaty from the ride. Pulled up a high top and ordered me some coffee and second breakfast. Hung out and visited with the gang for a few hours. It was a welcome change from chatting while riding.

As the morning was winding down, Joy, Anna, Mark, Jon, and I all said our goodbyes and rolled out to head home. We had a nice trip up through Anthem and the outskirts of Inspirada. Made a quick trip up to the Sloan Canyon Visitor Center before starting up Democracy. Anna, Joy, and Jon flipped a u-turn at Anthem Highlands leaving Mark and I to climb Democracy. The two of us went all the way to the top of the trail before heading back down the hill. Buzzed my house to show Mark where it was before escorting him to the crash gate to get him into the next neighborhood over. Knowing that he was good to go from there home we said our goodbyes and I turned around for the super short ride home.

Overall today’s ride went really good. Having a light day and day off certainly helped my legs, but they were still feeling a little sleepy here and there. I’ve really put them through the ringer the past 5 weeks mileage wise. Need to dial back the commute efforts a smidge to allow my legs the chance to recover some and then start pushing again.