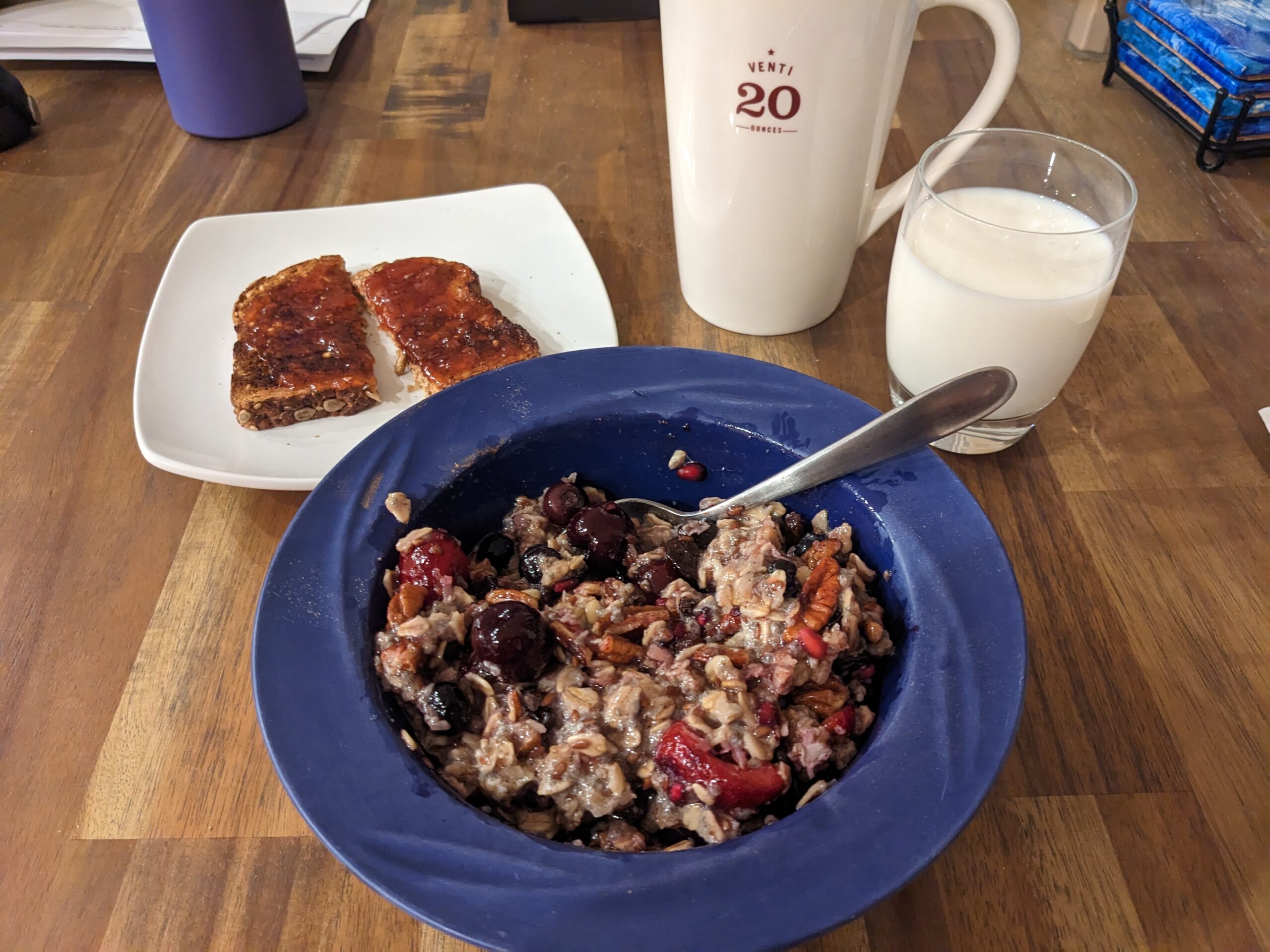 But what I do have are a very particular set of skills, skills I have acquired over a very long career, skills that make me a nightmare for people like you.

Hmmmm…certainly feeling tired, but want to get all this jotted down before I go into a coma.

Day started early with a huge 1,400 calorie breakfast. Absolutely love my huge bowl of loaded oatmeal. Knew today was going to be a good one and having those long burn calories in you will go a long way. I was kinda rushed because I needed to get to Anthem Hills Park on time, but wanted to get as much sleep as possible. I should have been up about 30 minutes earlier to be more relaxed, but it all worked out in the end.

Left the house just after 5 to roll down to Anthem Hills Park to pick up Joy and Mark. Mark hit me up earlier in the week and Joy the night before about rolling over to the start. While leaving at 5:30 was a little on the early side I wanted to have enough time in the bank for any flats along the way. We all rolled up nearly simultaneously and left dang near spot on at 5:30.

First stop would be Mountains Edge Park. I’d also heard from Caleb about meeting early and he settled on the park which worked out perfectly for use Henderson folks as it’s along the way. Our Anthem Hills Park Posse rolled into the park just before 6:30 and found Caleb getting kitted up and ready to go. I was surprised to also find Tom there wanting to roll out with us and there were two more coming to join. The more the merrier I always say!

We waited at the park for an extra 15 minutes for John and Rodger. Unfortunately they never made it before we rolled out. Before we’d made it to Fort Apache, Tom had turned around to go back to the park to wait. It’s all good as all three of them would roll up with plenty of time to spare.

Our group of four rolled up to Pedal and Pour at around 7. I hollered over to the gang that I was going to continue on to do a loop around the block. Caleb and Mark peeled off, but Joy decided she wanted to tag along. So we continued along Maule/Hualapai to Sunset. We hung a right to go back to Fort Apache and on to Maule again. Worked out great and we rolled in at 7:15 with plenty of time to spare. Have to get my Wandrer miles when I can get them.

Rolled up to Pedal and Pour and started shooting the breeze with everyone while we waited for everyone to show up. Was pleasantly surprised to see my guest Josh show up. I’d hit him up late last night about coming along. With such a large group we rolled out a little later than expected, but nothing too terrible. Almost immediately the fun began.

Got out in front mostly because Robert had thrown out that I had the route. Rode up alongside Dave Burns and we made a good show of keeping up a solid pace. Was actually feeling really good and strong. The ride up Grand Canyon went pretty quick and we made it to the Chick-fil-A parking lot in no time. We made it to the north side of the lot, dismounted, hoped the low cable fence, and joined the 215 Beltway Trail. Funny thing was someone calling out, “Cyclocross section, cyclocross section!”. Couldn’t help but chuckle at that.

Starting up the trail, we had a solid group that was together but strung out single file. Made great progress all the way to our exit at Alta.

Once we jumped onto Alta, we started working our way through Summerlin. We made a quick stop at Oxford Park for a bathroom and regroup break before the “Mini Villa Ridge” climb up Hallston/Mission Lakes. Once it was done we flew east to do the Villa Ridge climb. A funny point was after this fast descent when Josh rolled up and asked, “We basically climbing up all that we just descended?” Yes, Josh, yes we are. The climb went well and at the top I did the loop and added a ladder for…you guessed it…some Wandrer miles.

Regrouped with everyone on Clear Meadows like usual. Heading out we climbed Lake Mead as far as we could before running out of asphalt. Another quick regroup and we tore down to rejoin the Beltway Trail. Before rolling, Robert called an audible to add even MOAR climbing to the route. He did his best to relay the directions after the run onto Far Hills, but I was so unfamiliar with the area I didn’t feel confident leading at that point. We made the first turn, but anything after that we needed Robert’s input. Once we got onto the correct road it was smooth sailing all the way to Charleston. Robert had also made a change to return to Pedal and Pour via DFH and the west Summerlin express. Along that section we were just flying making super good time. Rolled into Pedal and Pour and you couldn’t get coffee and pastries into everyone fast enough.

After enjoying my coffee and pastry, Mark came over and mentioned that Remko and the fckthishill crew were heading over to Henderson as well, but going back UP DFH, doing a Red Rock Flyby, and asking if I wanted to go with. Never one to turn down a good time, or extra credit, I agreed.

Thankfully our new group kept a nice steady pace for the ride back. I was more than happy to sit on some wheels and enjoy the ride. I’d been putting in some serious work earlier in the day and the legs were certainly getting tired. We were making good progress until Shawn (sp?) started to fall behind after our break at the DFH Terrible’s. We slow rolled to let him get caught up. Once back on he mentioned that his stomach was pulling somersaults on him. We dialed it back a little more to keep him on.

We rolled into the Overlook together and enjoyed a quick breather and restroom break. After a quick 5, or so, minute break we were rolling again. Remko and Caleb were doing an awesome job leading out the group with a solid pace without blowing our legs up. We were just past the Bonnie Springs Road when we noticed that we’d completely lost Shawn. .We looked back and he was no where to be seen. I flipped around to go find him. Thankfully he was only about a mile back, but was off the bike and had bonked hard. Reminded me of when I bonked coming back from Overton and had to have the wife come get me.

We hung out for maybe 15 minutes before he felt good enough to make it to at least the cafe at Blue Diamond. As we started rolling, I told him that he was setting the pace and that I wasn’t in any hurry. We made it to the Blue Diamond turn off and stopped again for him to throw his jacket back on. Being stopped for so long had dropped his core temperature. Nothing worse than feeling sick AND cold. Didn’t take long and we were rolling again for the Terrible’s at the NV-159/160 intersection. The two of us had a nice cruise and chit chatted some and I was surprised when Shawn started considering finishing up the ride! Unfortunately it wouldn’t last as when we rolled in, Shawn mentioned his stomach was doing a number on him again. We pedaled around the lot a couple times, he dismounted, pulled up a chair at a picnic table, and called it a ride. Gotta give the guy props for making it to the Terrible’s when he’d thought he was only going to make Blue Diamond and the fact that he had been out in front really hammering the climbs while having front derailleur shifting issues for much of the day.

Rolling out of Terrible’s I was solo for the rest of the ride home. Honestly not too terribly much to report. Was feeling really good and strong, but the continuous solo ride from the Terrible’s to Green Valley Grocery at Volunteer and LVB took it out of me. I made a stop, grabbed my Zingers and Gatorade, and just sat and relaxed 20 minutes before rolling out to finish.

Started rolling along LVB and I had to check myself to not dump a bunch of watts into this first climb considering how far I still had to go. I just put my head down and did my best to keep it nice and steady. I was feeling solid and considered doing the south water tank and Nawghaw Poa Road climbs, but choose not to in order to save something for the climb up Democracy. While I was bummed to learn that I ended with less miles AND elevation that my boy Mark, I am glad that I opted to forgo those extra miles.

That wraps up another great group ride. Rode some great miles with great new and old faces while enjoying great laughs. Looking forward to the next one AND destroying what’s left of the large Marcos pizza hanging out in the kitchen!