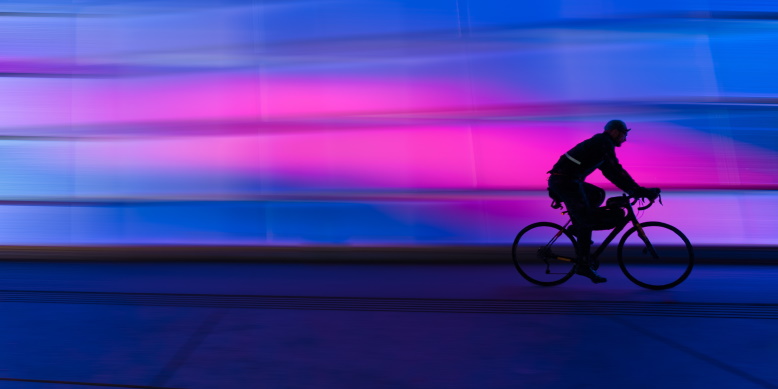 Today started off great with another amazing sunrise. I was very tempted to stop along Solera Sky and snap a couple pictures, but I was worried I’d be late to breakfast so I didn’t. It was another one of those where the clouds catch the sunlight just right and they turn bright red and orange. Absolutely gorgeous.

With construction continuing on a few of the north/south roads I use to commute I’ve had to come up with new ways to get to work. Today I tried Valle Verde north to Sunset/Mountain Vista and I was pleasantly surprised. I joined Valle Verde at Windmill and had a dedicated bike lane all the way to Sunset. Instead of turning left onto Sunset I continued north to Sunset Way. I made another left to go west to the intersection of Sunset and Mountain Vista. I turned north onto Mountain Vista and was surprised with yet another dedicated bike lane. I continued to have a bike lane, for the most part, all the way until Harmon. And while Harmon to UNLV is a breeze, I really wish the road surface was smoother and cleaner. Beggars can’t be choosers I guess.

For the ride home I continued experimenting with new roads. What sucks is that Eastern is so sketchy even though I only really have to ride it for such a short section. That mile and a half between Patrick and Warm Springs is pretty hectic. Once I got over to Spencer things were much quieter making for quite the nice ride.

As I started climbing into Seven Hills I set off on an adventure along some of the trails. I’d thought I could hook into a couple neighborhoods as a kinda back way around, but of course everything was locked up tight which resulted in an out and back leg. No biggie just meant I’m home a little later than usual.

Anyway, had a nice dinner and get to have a few minutes to chill out and relax before crashing out, waking up early, and doing it all again with some like minded individuals.