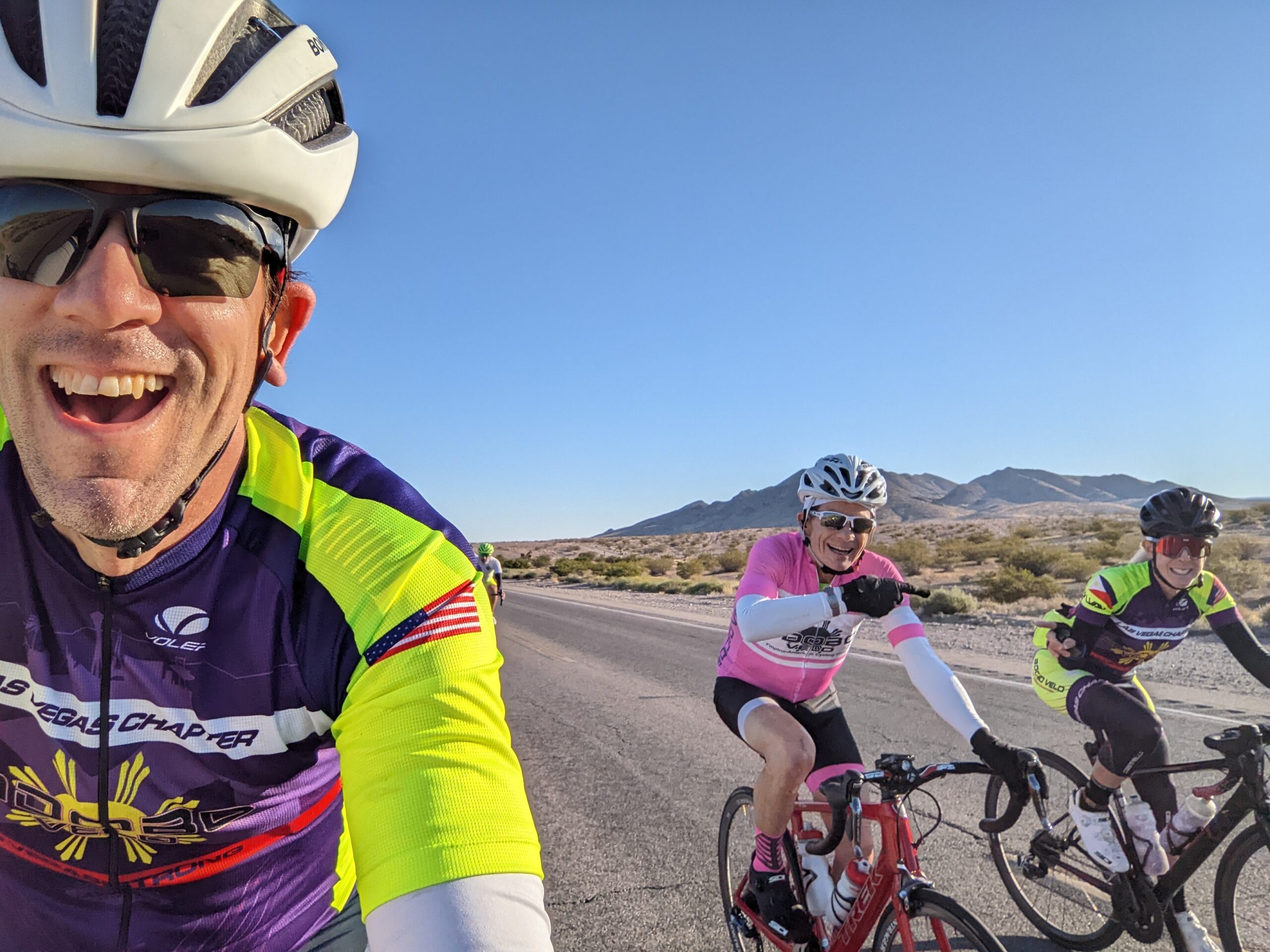 Ride to Remember 2022 with Extra Credit

What an absolute blast. Had an amazing time with some amazing riders today.

Started the day early with a little extra credit before riding down to the start. I had thrown out the idea of meeting up with some Adobo Velos at the Green Valley Grocery at the corner of Volunteer and Las Vegas Blvd. Had a couple show up which made the quick ride down to Camping World fun.

Before that, Joy had said she’d meet me and knowing she lives in Inspirada I shot her a text about hooking up even earlier. I knew I wanted to do the climb up to the Sloan Canyon Contact Center. I was expecting the main ride to be a chill cruise and wanted to put in some hard efforts before the start. Opted to drag Joy down through Inspirada versus taking the high road Via Inspirada which is under construction.

The ride out to Camping World was a quick mile jaunt and I was floored by the number of riders who showed up. Hung out for about 30 minutes visiting people from different groups before we all started lining up to roll out.

I’d guess the first six miles were all the chill ride I was going to get. It was nice to just cruise and noodle visiting and chatting with everyone. Once we passed mile six, Robert pulled out and starting putting on steam. Of course our little group was obliged to follow him. We all got lined up and had a great pace line going all the way down to Jean.

At the Jean turn around and rest stop we milled about and the idea of continuing south to a quarry started getting tossed around. Eventually we ended up with a small group of Joy, Mark H, Mark D, Al, Joe, Joseph, and I. After the gator back section we had a great cruise on some gorgeous asphalt. I was really surprised with how nice it was out in the middle of nowhere. I did get a little spicy when a large Dodge Ram passed us. I saw a chance at jumping in behind it and was rewarded with a nice 35-40 MPH pull until a gentle corner and the start of a slight incline. Having burned a few matches to jump on I watched the truck pull away as my legs complained for a break. It didn’t take long for the rest of the group to catch me up after that. Did make it all the way to the end, rested for a few minutes, and then turned back.

Ride back to Jean was relatively tame compared to the ride out. Having stroked out egos enough, we all lined up into another pace line and took our pulls. Made really good time and was surprised to see Mark, Joe and I end up on the top 20 for a segment along the way back.

When we rolled into Jean, Pedal & Pour was just wrapping up and packing it in. Thankfully none of us really needed anything. Al got a little of a head start, then Joy and Mark, while Joe and I kinda hung back. I was feeling a little guilty with Joseph and Mark still off the back; however, we spotted them making the turn onto Las Vegas Blvd and felt safe knowing the two of them would be fine together.

Joe and I started rolling north and it didn’t take long before I realized that if we wanted to catch our three amigos up the road we weren’t going to do it side-by-side. I let up a little, let Joe pull up, and as he went by I hollered “Hey man if we’re going to catch them we’re going to need to line it up.” And so we did. Joe and I took our turns pulling one another. We finally swallowed up Joy and Mark and then the four of us reeled Al in. That was the train all the way back to Pkwy Tavern at Volunteer and Las Vegas Blvd where Robert and Stan were hanging out.

Hung out with the gang for about an hour before we packed it in and called it a day. Our same group of five was also the same group who had ridden to the start of the ride. We cut across Volunteer and lost Al and Joe to turn north on Executive Airport while Joy went south on Via Inspirada. This left Mark and I continuing east on Volunteer. We did our usual Hampton climb which I’d realized we hadn’t done in quite some time and the last time we’d done it I was falling apart bonking! Thankfully this time my legs were still going strong and we parted ways at Anthem Pkwy. From there it was a quick solo ride up to Atchley and a Somersworth climb to home.

There is something to be said about riding with a great group of like minded people. It was an absolute dream rolling with our group of five. Everyone took their pull into a face full of wind. The leaders kept it nice and steady not smashing it too hard when they’d pull to the front. Everyone rode true, smooth, and consistent. No crazy moving around or big surges or slow downs. Honestly it was a great time and couldn’t ask for more.